Donald Trump’s North Korea Gambit: What Worked, What Didn’t, and What’s Next 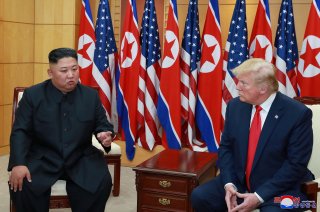 It’s easy to criticize Donald Trump on North Korea: the declarations of love for a brutal dictator, the disdain for details and history, the photo opportunities where the strategy should have been, but while the execution may have been lacking, he did attempt a new approach, and that offers important lessons for the incoming administration.

It did not get off to an auspicious start. During Trump’s first year in office, Kim Jong-un tested his first intercontinental ballistic missiles, demonstrating the potential to reach the U.S. homeland for the first time, along with a slew of short and medium-range projectiles and what appeared to be his first hydrogen bomb.

Trump threatened him with “fire and fury like the world has never seen.” The two leaders traded insults. Tensions ratcheted up. By the fall of 2017 conflict looked like a real possibility. Kim was pictured studying strike plans with the head of his strategic forces. Jim Mattis, then U.S. Defense Secretary, slept in his clothes to be ready to give the order to shoot down an incoming North Korean missile. In a rare show of unity from the permanent members of the UN Security Council, even China and Russia were persuaded to back tough new sanctions on Pyongyang.

But then Kim Jong-un declared victory, proclaiming his nuclear force complete and abruptly shifting his attention to diplomacy. He still talked about the “nuclear button” on his desk, but he also sent his sister to the 2018 Winter Olympics in South Korea –the first member of the Kim family to cross the border since the Korean War – and he invited Donald Trump to meet him “as soon as possible,” who quickly agreed.

Kim’s relations with China had been seriously strained by his repeated nuclear and missile tests, but with the news that a meeting with Trump was on the cards they underwent a rapid thaw. Within the month he was in Beijing, where he was welcomed as a guest of honor by Chinese Communist Party leader Xi Jinping and the two men put on a convincing show of forgetting their recent differences. He strengthened ties with Russia too, later dining with Vladimir Putin at a glitzy gala in Vladivostok. But it was the summit with Donald Trump in Singapore in June 2018 that made history, as Kim Jong Un became the first North Korean leader to meet a sitting U.S. president – a feat neither his father nor his grandfather achieved.

By meeting Kim, Trump was accused of legitimizing the young dictator and playing into his domestic propaganda – both of which were valid concerns – but that doesn’t mean direct engagement was necessarily wrong. Refusing to talk to Kim hadn’t stopped him from developing nuclear weapons so far, and in North Korea’s top-down political system he was the only one capable of making real concessions. In short, it was worth a try.

But from the outset the implementation was flawed. Trump treated the summit as a victory in itself, reveling in the media attention and acting as though he had pulled off something truly remarkable by persuading Kim to meet, when in fact North Korean leaders had long sought the prestige such an event would bring. Kim wasn’t conceding anything by sitting down with Trump – just the opposite – he was proving that his strategy had worked, that by developing nuclear weapons he had forced the hostile imperialist enemy (as the United States is depicted in North Korea) to take him seriously and to treat the country with the dignity and respect it deserved. The photographs of Trump listening attentively to Kim, the cheering crowds, and the North Korean flag flying alongside the Stars and Stripes only underlined his point.

The summits themselves delivered little of substance for either side. Kim offered the same vague commitment to denuclearization his predecessors had given, sticking with the regime’s preferred formulation on the removal of weapons from the “Korean peninsula,” potentially including every U.S. base from which it could be targeted, rather than just North Korea. Trump rejected Kim’s proposal to dismantle the Yongbyon nuclear facility in return for lifting sanctions, choosing instead to walk away from their second summit in Hanoi. Their final meeting on the border between North and South Korea amounted to barely more than a photocall. But along the way, the American president threw in some unexpected bonuses.

Speaking to the press after the Singapore summit, Trump called the United States’ joint military exercises with South Korea “war games” and “very provocative” – terms more commonly used by Pyongyang – announcing that he was canceling them, apparently without consulting his own generals or Seoul. He publicly and repeatedly complained about the cost of keeping U.S. troops in South Korea, demanding Moon Jae-in’s government pay more and questioning the value of regional alliances. And he undermined his own officials, inadvertently signaling to Pyongyang that any working level agreements could be quickly overturned by the presidential Twitter account and they should hold out for another summit with the leader instead.

By the end of Trump’s term, the talks had petered out and he had little more to show for his efforts than a drawer full of flattering letters. For all of the talk of their great personal relationship, Kim Jong Un had only advanced his capabilities once again. At a military parade in October, he rolled out his biggest intercontinental ballistic missile yet, immediately dubbed the “monster missile” by analysts. Donald Trump could only add his name to the list of American presidents who had tried and failed to curb North Korea’s nuclear ambitions before him.

But that doesn’t mean there is nothing to learn. The failure of Trump’s talks doesn’t mean that all talks are doomed to fail. By agreeing to meet Kim at all, Trump handed him some powerful domestic propaganda, but his other major gifts – cancelling military exercises, questioning the U.S. troop presence, undermining alliances – were given away in press conferences and tweets, not at the negotiating table. Talks that were preceded by serious working-level preparations and conducted by a president who worked with allies and stuck to his script, might have looked very different. But Trump has at least lowered the cost for Biden to meet Kim should he eventually decide to do so, inoculating him against some of the inevitable criticism that he is showing weakness by sitting down with a dictator when a Republican president has done so first.

The last four years also proved once again that Kim Jing-un is rational and therefore able to be deterred – not the madman with nukes that is so often portrayed – and that he is sufficiently interested in talks to voluntarily halt nuclear and long-range missile tests while they were going on, to slow his march if not to halt it altogether. In the meantime, his own domestic pressures have only increased. Last month Kim tearfully apologized to his citizens for failing to improve their lives and repay their trust in him as the country’s economy continues to struggle under the weight of sanctions and the coronavirus pandemic. He might be persuaded to hold off testing his new “monster missile” if he believes he stands to gain from another round of dialogue with the Biden team.

Finally, and perhaps counterintuitively given where they ended up, the Trump years showed that the United States was able to work together with China and Russia to put serious pressure on Pyongyang, that there were limits to the behavior they were prepared to tolerate. As relations between Washington and Beijing now rapidly spiral down, the need to contain the nuclear threat from North Korea may be one thing they can agree on.

Katie Stallard is a Global Fellow at the Woodrow Wilson international Center for Scholars and author of the forthcoming book Dancing on Bones: History and Power in China, Russia, and North Korea, to be published by Oxford University Press.