Donald Trump Offered to Help North Korea on Coronavirus. Why Not Iran? 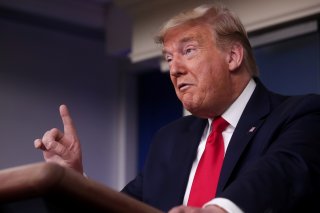 The coronavirus outbreak has already had effects that go far beyond public health issues. It has impacted Washington’s relations with numerous countries, adversaries and allies alike.

Nowhere is that more evident than in the Trump administration’s policies toward North Korea and Iran. Interestingly, though, the administration’s treatment of those two countries is a study in contrasts.

As my Cato Institute colleague Doug Bandow notes, the pandemic has totally eclipsed Washington’s usual concerns about North Korea’s behavior. U.S. policymakers have obsessed about Pyongyang’s nuclear and missile programs and ambitions for decades, but their attention is now, understandably, focused elsewhere. President Trump has not entirely ignored Pyongyang during this crisis, however. He sent a letter directly to North Korean leader Kim Jong-Un offering U.S. aid in combatting the epidemic.

One analyst dismissed that overture as “pen-pal diplomacy,” but Trump’s letter was a significant initiative to revive the moribund dialogue with Kim that had begun with such promise at the Singapore summit nearly two years earlier. Although Trump did not explicitly offer to ease U.S. sanctions, his latest missive suggested a wish to use bilateral cooperation on the coronavirus crisis to advance that dialogue and perhaps facilitate cooperation on other issues. That approach should be applauded, not dismissed or ridiculed. It was notable that although the DPRK government declined the offer, it apparently did so through a reasonably polite, personal letter from Kim’s sister, widely viewed as perhaps his most important adviser.

Unfortunately, Trump’s behavior toward Iran in the midst of the coronavirus pandemic is a depressing contrast to his relatively conciliatory approach toward North Korea. Although Washington made a perfunctory offer of humanitarian medical assistance to Tehran, that gesture was more than offset by the ostentatious continuation of hostile, debilitating measures. The United States and the United Arab Emirates even conducted war games explicitly directed against Iran on March 23. The Pentagon went ahead with that full-scale exercise, even as it was canceling or scaling back similar exercises in other parts of the world.

There were no indications of a willingness to ease other components of Washington’s unrelentingly hostile policy toward Iran either.  Sanctions that Trump imposed earlier had severely limited Iran’s access to medicines and medical supplies, as Human Rights Watch noted.  Yet, when the coronavirus outbreak exploded in Iran, the president showed no inclination whatever to suspend or even modify those punishing restrictions.

Iranian President Hassan Rouhani pointed out the hypocrisy. The United States should lift sanctions if Washington truly wanted to help Iran to contain the outbreak, Rouhani said on March 23, adding that Iran had no intention of accepting Washington's offer of humanitarian assistance. "American leaders are lying,” he charged in a televised speech to the Iranian people, adding “If they want to help Iran, all they need to do is to lift sanctions .... Then we can deal with the coronavirus outbreak."

Rouhani’s rejection of even limited humanitarian aid can legitimately be condemned as short-sighted, but given the context of Washington’s vague offer, it was understandable. At the time Rouhani spoke, Iran was one of the countries hardest hit by the pandemic, with more than 26,000 cases and more than 1,700 deaths.  Just four days later, the totals were up to 29,406 cases and 2,234 deaths.  Yet Washington steadfastly adheres to its sanctions policy.  Indeed, the administration imposed fresh sanctions on March 17, in an effort to compel the regime to release detained Americans.

It’s a policy that is both cruel and tone-deaf. Trump and his advisers are ignoring growing calls at home and abroad to lift at least some of the sanctions. Even Washington’s closest allies in Europe are spurning U.S. warnings to maintain a hard line toward Tehran. The European Union now is openly defying U.S. policy, announcing a 20 million euro aid package for Iran.

U.S. policy toward both North Korea and Iran leaves great room for improvement. Trump’s outreach to Pyongyang was a constructive gesture, but it needs to be accompanied by the easing of sanctions. Washington’s entire attitude toward Tehran is even worse. The hostility that U.S. leaders display is downright toxic.  Maintaining sanctions, much less imposing new ones, in the midst of a pandemic is an act of cruelty that should shame all Americans. As respected scholars have shown, sanctions have a long history of inflicting harm on innocent populations in target countries while generally failing to compel the regimes to capitulate on key issues. The strategy is harmful even in normal times, it is an abomination during a massive public health crisis.