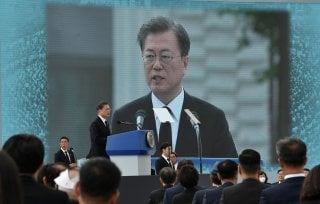 Hyperactive, dramatic language is nothing new for senior North Korean officials and the state-run Korean Central News Agency. Indeed, it is expected. But the recent remarks from Kim Yo-jong, the sister and close adviser to Kim Jong-un, were sharp and venomous even by North Korea’s standards.

The issue that got under her skin: the fact that anti-Kim activists in South Korea were sending propaganda leaflets over the inter-Korean border and into the North. These kinds of psychological operations drive the Kim regime nuts for obvious reasons; the more anti-Pyongyang material the North Korean population absorbs, the greater the chance at least some of those North Koreans will question the mythological foundations of the Kim regime itself. One such operation nearly resulted in a shooting skirmish across the border in 2014, when North Korean soldiers tried to shoot down a balloon packed with thousands of anti-regime leaflets.

It goes without saying that the Kim dynasty hasn’t gotten any more sympathetic to this information warfare as the years have gone by. Calling the South Korean activists “human scum,” and “mongrel dogs,” Kim Yo-jong threatened to sever all of Pyongyang’s major reconciliation initiatives with Seoul if the Moon administration failed to stop them. The items on the chopping bloc, according to Kim, include the most comprehensive product of South Korean President Moon Jae-in’s 2-year long peace effort: the September 2018 military agreement that was designed to improve channels of communication between North and South Korean officials and officers while minimizing the possibility of clashes along the DMZ.

The Moon administration quickly took notice of the comments and responded almost immediately, assuring the North that those involved in the leaflet campaign would be dealt with and that future drops would be curtailed by the authorities. To drill home the point, a Blue House official called the leaflet operations “an activity that is truly good for nothing.” The spokesperson for South Korea’s unification ministry said the government was considering legislation to crack down on North Korean dissident groups who partake in these initiatives, leading some activists to condemn the measures as an infringement of their right to freedom of speech.

The optics for Moon are, to put it generously, not ideal. As the Pacific Forum’s Andra Abrahamian wrote on Twitter, “This is not a good look.” It is hard to quibble with him. The resounding speed with which Seoul responded to the North’s outburst rubs a lot of people the wrong way and on the surface looks like a democratic government bowing their heads to their tyrannical masters. It will take a public relations whiz somewhere in the depths of Moon’s administration to spin this in a positive direction.

But just as the optics look horrible, seeing Moon’s peace initiative go up in smoke is even worse. As silly and downright comical the Kim regime’s pile of complaints can be, Pyongyang is actually correct when it states that leaflet operations violate the 2018 agreements. The April 27, 2018 Panmonjon Declaration couldn’t be any clearer:

"South and North Korea agreed to completely cease all hostile acts against each other in every domain, including land, air and sea, that are the source of military tension and conflict,” the declaration reads, "In this vein, the two sides agreed to transform the demilitarized zone into a peace zone...by ceasing as of May 1 this year all hostile acts and eliminating their means, including broadcasting through loudspeakers and distribution of leaflets, in the areas along the Military Demarcation Line.”

You can’t blame Moon or his unification ministry for wanting to uphold their end of the bargain—particularly when the alternative is the complete collapse of the very agreements Moon himself has worked so hard to accomplish.

Moon’s conservative political opponents will deride him for being a North Korean lackey or a docile weakling who quickly caves to the Kim regime’s pressure. There is a good portion of Washington, D.C. who would quietly agree. Inter-Korean relations have not been going anywhere since Kim and Moon signed their joint military deescalation accord. What is the point, they may ask, of preserving an inter-Korean peace process that is stuck in the mud, at best?

The answer, however, is quite obvious: because the alternative—no peace at all and a return to the icy dynamics of 2016-2017—is considerably worse and does nothing to mitigate the tension of an already unpredictable region of the world.

It is easy for Moon’s opponents to criticize his efforts, but far more treacherous for them to come up with a policy that has a higher probability of success.