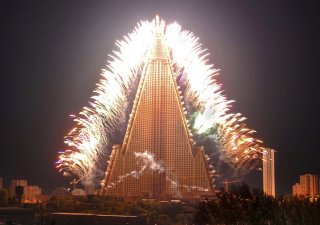 If you’ve ever wondered what the hotel accommodations are like in Pyongyang, the capital city of North Korea, wonder no more: A new coffee table book features the photography of just those venues.

“Hotels of Pyongyang,” a new book by James Scullin and Nicole Reed, is available now. Scullin has the unlikely profession of leading guided tours in North Korea, while Reed is a photographer. The photos were all taken on a visit to the country in 2019, prior to the closure of North Korea’s borders due to the pandemic.

“I’ve been leading tours in North Korea for a number of years, and I’ve always been fascinated in the architecture there,” Scullin said in a trailer for the book that was posted to YouTube. “Because it does borrow and was influenced heavily by Soviet architecture. So we wanted to find way where we could document all of these hotels in Pyongyang. Because when you’re in North Korea as a tourist, your experience is quite molded by your time spent in these hotels.”

Scullin, a native of Australia who has also lived in China, told CNN last month that he’s been to North Korea eight times, and considered the hotels “the highlight of the trip.” He added that hotels are one of the few places in the capital city where coffee is easily available, although there’s no Wi-Fi or room service available, and revolutionary songs are always being played at the hotels.

Judging by the photos of the book’s website, the hotel architecture is a mixture of Soviet-inspired exteriors, and inside rooms that have a faux-1960s aesthetic, the kind of stuff that wouldn’t seem out of place in either the “Austin Powers” movies or “Mad Men.”  Reed, though, said in the video, that the interiors of some of the hotels look like they’ve recently been updated from interiors of the late ‘70s, to the late ‘80s.

According to The Economist, Scullin’s forward to the book “acknowledges the importance of hotels as propaganda showcases for the regime,” although he noted that it’s common, at hotel bars in that country, to “hear stories about the country that go beyond the party line,” especially from people who work there.

Most tourists who visit North Korea are from China, and it’s rare for Americans to visit the country, with occasional exceptions such as basketball Hall of Famer Dennis Rodman.

“For a country that’s so uniform, like North Korea, I think what we really captured was how idiosyncratic and individual each of the hotels are,” Scullin said in the YouTube video. “They all do have a similar, Brutalist feeling. [But] they all have different color palettes, and different color schemes. And you don’t ever really seem to see the same furniture twice.”

“Hotels of Pyongyang” is available for purchase from Amazon.

Image Credit: Fireworks are set off around the 105-story Ryugyong Hotel to celebrate the May Day anniversary near the Botong River in Pyongyang May 1, 2009 in this picture released by North Korea's KCNA news agency on May 2, 2009. REUTERS/KCNA.