How Donald Trump Can Jumpstart Diplomacy with North Korea 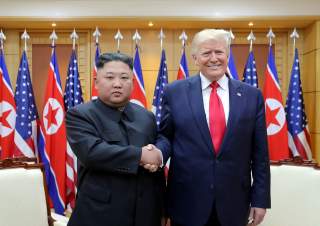 President Donald Trump apparently has given up on North Korea, according to his aides. He said he wants no summits this year while he concentrates on his reelection campaign.

Downplaying PR extravaganzas makes sense as long as there is no agreement. However, the administration appears determined to move in reverse. An anonymous official told CNN that talks were “dead.” Apparently, the State Department has tightened already restricted travel to the North.

Dropping efforts to achieve detente with the Democratic People’s Republic of Korea leaves President Trump without an obvious foreign policy success. Endless wars in the Middle East continue. The president abandoned the nuclear deal with Iran, creating greater Gulf instability. Relations with Russia have worsened in practice. Hostile governments in Cuba and Venezuela continue to challenge America. The main success of the trade war with China was winning increased agricultural sales to benefit his Midwest supporters, at the high cost of disrupting the economy with burdensome tariffs.

The president should not give up working to defuse the Korean nuclear confrontation.

He deserves great credit for ignoring complaints from the usual Korea policy analysts about his decision to engage the DPRK. Refusing to talk with one’s adversaries is dangerous as well as myopic. Imagine if the U.S. did not have diplomatic relations with the Soviet Union during the Cold War and especially the Cuban Missile Crisis. America and China might have avoided two and a half years of war in Korea had the two governments had regularly communicated as allied forces moved north toward the Yalu River.

Refusing to talk with Pyongyang for years was equally foolish. It is especially dumb now when North Korea’s Supreme Leader Kim Jong-un obviously desires contact. Indeed, he has proved to be quite skilled at the diplomatic game. That does not mean he is a closet liberal or friend of America. But he appears to be a man with whom America and, more importantly, South Korea, can do business.

The president should build on this important achievement. How to proceed?

President Trump should give the equivalent of a victory speech. He should note that he took the first, critical step in defusing the seven-decade long confrontation in Northeast Asia. In this way, he has achieved something none of his predecessors succeeded in doing.

That doesn’t mean the lion is ready to lie down with the lamb on the Korean peninsula. But as during the move toward détente as the Cold War ended, the threat of military confrontation diminished. Moscow still possessed the ability to wreak havoc in Europe and around the world. However, the desultory apparatchiks who took charge of the U.S.S.R. during the Brezhnev era lacked the will to act. Creating a similar alternative path for the DPRK would be a limited but invaluable achievement nonetheless.

To move further, to make nuclear or other arms agreements, ones that can survive the usual political vicissitudes, requires greater personal contact and trust. And that means more than an occasional brief summit between principals. The president should explain that this year he intends to strengthen the foundation of the relationship to support the larger denuclearization agreement he still seeks.

That doesn’t mean a naïve belief that the extreme differences in political ideologies and systems can be wished away through personal rapport, however genuine. But it means changing a once persistently antagonistic relationship into one in which U.S. military coercion seems unlikely. Increasing communication, contact, and cooperation would advance a number of possible objectives—denuclearization, arms control, or simply civil relations. And listening to what the North says it desires increases the odds of reaching an agreement.

The 2018 Singapore summit statement ordered the North’s objectives: better bilateral relationship, improved regional security, and then denuclearization. Separately South Korean officials reported that Kim said nuclear weapons would not be necessary if Washington and Pyongyang formed a closer relationship. Skepticism of Kim’s pronouncements is warranted, but such positions track with reality—after Muammar Khadafy’s brutal demise after surrendering his missile and nuclear programs, what sane dictator would voluntarily disarm? And the improved relations Kim claims to want would benefit the U.S. too.

To that end, the president should announce that he intends to spend this year strengthening ties at all levels. He should revoke the ban on U.S.-North Korean travel, both to and from. Contact should be encouraged, not prohibited. Moreover, he should propose exchanging liaison offices, with permanent representation in both capitals. The U.S. should simultaneously insist on reciprocal rules governing freedom of movement of diplomats and wide-ranging conversations on all topics, including human rights.

Critics complain that such a policy would “reward” the North. However, expanded communication would benefit both sides. It would improve the prospects for diplomacy and create mechanisms to defuse conflicts. The very act of legitimizing contact with Pyongyang would reduce the implicit threat of U.S. military action. Further, it would give America a small window into North Korea, a useful step when dealing with such an opaque regime.

The president also should propose that the U.S., China, and both Koreas sign a peace declaration for the peninsula. A formal peace treaty should be placed on the agenda for future negotiation. Such a declaration should not be controversial. After all, the war is over. The long-ago combatants should acknowledge this reality.

Opposition centers around the contention that recognizing reality somehow favors the North. The great success of America’s post-Korean War policy was preventing reignition of that conflict. The U.S. should celebrate that achievement. Moreover, Kim’s agreement would undercut the North’s use of perpetual war to strengthen political support for the regime. Regime propaganda might continue uninterrupted, but the dissonance between claims and reality would grow.

Some South Koreans fear that admitting the peninsula is at peace might reduce American support for the bilateral alliance. However, a peace declaration does nothing more than recognize reality. It is that reality which undercuts the case for Washington’s continued defense of a nation with a population twice as large as and an economy more than 50 times that of its adversary. Only American support prevented North Korea’s conquest of the Korean peninsula in 1950, 1960, and maybe 1970. However, since then the Republic of Korea has surged past the North. Why should U.S. taxpayers continue to pay for the ROK’s defense? That question should be asked whether or not a peace declaration is issued.

Finally, the administration should adapt its objectives to reality. It should be obvious that demanding complete denuclearization before offering any benefits is a dead end. The president should treat what he believes to be Kim’s promise to denuclearize as aspirational, a future possibility if a series of conditions are met. Thus, denuclearization is the end of a long road highlighted by multiple arms control steps along the way.

There is great reluctance to admit the obvious, that the North already is a nuclear state and is highly unlikely to surrender what the regime’s sees as the ultimate tool to guarantee its survival. However, it is important not to allow the perfect to be the enemy of the good. A DPRK with nuclear weapons will always be dangerous, but one with a limited arsenal, constrained by agreements, enforced by inspections, and integrated in the larger international order would be far less dangerous. Perhaps this North Korea also is beyond reach. But the U.S. will never know unless it pushes in that direction.

The administration should propose discrete steps that would reduce the military threat posed by the North. Each one should provide value on its own and be consistent with long-term denuclearization: continued suspension of testing, a compilation of a nuclear inventory, freeze on production, destruction of specific facilities, outside inspections, and more. Even if the process never reaches the ultimate objective of denuclearization, the result would be a more stable and peaceful peninsula.

But moving along requires making concessions in return. Which means offering genuine sanctions relief. Agreements can be enforced by incorporating snap-back provisions if the terms are violated. Sanctions should be viewed as a means to an end, whose purpose is fulfilled as meaningful disarmament is achieved.

Finally, Washington should consciously remove barriers to South-North Korea reconciliation. Pyongyang is a direct threat to the ROK, not America. Seoul should take the lead in developing their relationship. In contrast, Washington can and should step back from being in between the two. Thus, sanctions relief should begin by empowering the South in its relations with the DPRK, allowing joint economic and humanitarian projects to proceed. Encouraging South Korea to act as a sovereign state, rather than a U.S. dependent, also would strengthen ROK President Moon Jae-in’s position and authority to negotiate with the North.

President Trump took a risk in pursuing the opening with Kim. The process has stalemated, but he should not abandon the opening which he has created. Progress remains possible but will require a change in approach. The possibility of promoting stability and peace is worth the risk of doing so.

Doug Bandow is a Senior Fellow at the Cato Institute. He currently is Scholar-in-Residence with Centre for Independent Studies in Sydney, Australia. He is a former Special Assistant to President Ronald Reagan and author of several books, including Tripwire: Korea and U.S. Foreign Policy in a Changed World and co-author of The Korean Conundrum: America’s Troubled Relations with North and South Korea.