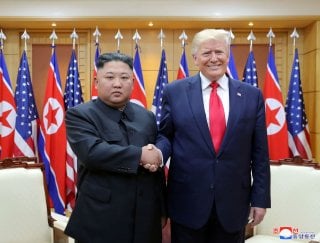 No matter who wins this November, one shouldn’t harbor any illusions of an overnight transformation. Just like the broader international system, the United States is grappling with structural shocks, including unprecedented ideological polarization, if not “culture wars,” in an increasingly social media-driven information landscape. Abroad, China has emerged as the one true peer and fully competitive rival, which could upend centuries of Western primacy in global affairs.

One could even argue that we are finally seeing the “real Cold War,” since the Soviets were never truly a peer and the so-called Cold War was far from “cold,” given its tens of millions of victims just during the Korean and Indo-China wars alone. And the coronavirus pandemic, which has hammered the global economy and rekindled geopolitical tensions with a toxic tinge of xenophobia and paranoia, will present a years-long if not a generational crisis for the foreseeable future.

Nonetheless, there are three reasons to be cautiously optimistic about the prospects for peace on the Korean Peninsula under a Joe Biden administration. First of all, American presidents, especially over the past half-a-century, have enjoyed significant latitude in matters of foreign affairs even if they have struggled with pushing through transformative domestic reforms under a heavily diffused political system which Francis Fukuyama has aptly called “vetocracy.”

Over the past decade, we have seen both the Obama and Trump administrations quickly overturning key pillars of their predecessor’s foreign policy initiatives, which only reinforced the power of the presidency just as it raised broader concerns over the coherence of American power projection in the world. And this takes us to the second point, namely the major policy changes one can expect if the Democrats manage to secure the presidency later this year.

Though far from a foreign policy dove, Joe Biden will likely use his presidency to restore major Obama-era global commitments, from the Paris Agreement on climate change to various arms-control regimes with Russia. There is a good chance that Washington will re-accede to the Iranian nuclear deal, which European powers continue to stand by. A restoration of frayed transatlantic relations will inevitably include coordination on shared geopolitical concerns in the Middle East, with Iran as a defining strategic priority. And this will inevitably have an impact on recent efforts to open communications channels with Pyongyang as part of a potential “grand bargain” between the United States and the North Korea regime.

In the past, we have seen how Democratic presidents built on groundbreaking initiatives by Republican predecessors, most prominently Nixon’s détente with Mao’s China, which laid down the foundation for four decades of “peaceful co-existence.” Trump’s historic and unprecedented summits with the North Korean leadership has rightly shattered the taboo of direct engagement in ways that makes even more sense than the once supposedly promising Sino-American rapprochement. On this issue, I expect the Biden administration to build on, rather than dismantle, the strategic gains of the current administration, which has combined pro-active diplomacy with relentless sanctions and pressure campaign.

In diplomacy, it takes two to tango, and as far as North Korea is concerned, we have a deeply authoritarian regime which is, nonetheless, led by relatively more forward-looking “millennial” leadership, namely Kim Jong-un and his siblings, especially the more even-keeled and astute Kim Yo-jong. With the coronavirus pandemic further devastating not only North Korea’s heavily-sanctioned economy but also its top partners in China and Russia, Pyongyang has growing reasons to keep the communications channels open. Geopolitics is a realm of unfathomable contingencies and uncanny tempest but, as things stand, the prospect for peace looks a tad more promising under a Biden administration.

Richard Javad Heydarian is an Asia-based academic and columnist who was part of an official delegation of Asia-Pacific scholars to North Korea in 2018. He is the author of, among other works, “The Indo-Pacific: Trump, China and the New Struggle for Global Mastery.”