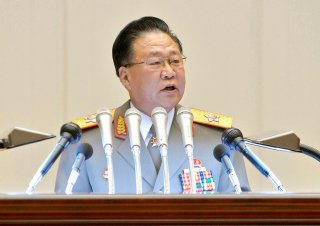 The sudden death of North Korean leader Kim Jong-un could theoretically destabilize what remains a tense standoff with the United States and its allies. While power has up to now passed through hereditary succession, Kim has today no heir of age, implying the risk of an internal power struggle. The North Korean Constitution gives us some guidance over the parameters of a transition of power but cannot eliminate the worrying prospect of factional strife in the nuclear-armed state.

Under the Constitution, the supreme leader of North Korea is elected by North Korea’s legislature, the Supreme People’s Assembly (SPA). There is no formal system of hereditary succession—it has just been a practical convention up to now. More precisely, the symbolic title of “supreme leader” goes to the Chairman of the State Affairs Commission (SAC), which under the current Constitution is the highest executive authority and the commander-in-chief of the armed forces. Note that Kim Jong-un is both SAC Chairman and Chairman of the Worker’s Party, implying a remarkable concentration of executive, military, and political power.

If something were to happen to Kim, it is presumably SAC First Vice-Chairman Choe Ryong-hae who would manage executive functions until the legislature elected a new leader. Choe also holds important procedural keys to manage the transition in his other capacity as President of the SPA Presidium. The Presidium stands for the legislature when it is not in session and has the power to interpret the constitution and call extraordinary SPA sessions, a necessary step for electing a new supreme leader. Finally, note that Choe’s concurrent capacity as Vice-Chairman of the Worker’s Party means he embodies the concentration of power typical of North Korean supreme leaders, should he try to claim the position for himself.

Despite these relatively clear constitutional guidelines, a non-hereditary transition process deviates from historical precedent and in that sense could potentially degenerate into factional strife. Sections of North Korea’s leading elite may disagree on whom to support for supreme leader. The powerful military leadership may also weigh in. Some might seek assurances against the sort of purges Kim Jong-un conducted when he rose to power, while some might hope for them as an opportunity for quick promotion.

Where the chips ultimately fall depends on something we know very little about: the personal relations, alliances, and rivalries in North Korea’s ruling elite. Some facts can completely change expected dynamics. For instance, if it turned out to be true that Kim Jong-un’s sister married Choe Ryong-hae’s son, it would make unlikely what otherwise would have been a probable conflict.

Whatever happens, major domestic instability in North Korea would in principle be very bad news for neighboring countries. Nobody wants to see the words “nuclear weapons” in the same sentence as “civil war,” “warlords” or “failed state.” What if a faction starts selling nuclear materials to create revenue? While there are contingency plans imagining a U.S.-South Korean or Chinese intervention to enter the country and go secure the weapons in the event of major instability, this could very rapidly escalate the situation for the worse, as it could set in motion long-drilled North Korean counterstrike plans.

Ultimately, the relative predictability of a North Korea under Kim Jong-un’s rule appears preferable to the potential danger and chaos of one without him. That said, the United States and its allies would clearly be much better informed and better equipped to deal with instability in North Korea if there were peace, regular channels of communications, and an arms control agreement with nuclear inspectors on the ground. The current rumors about Kim Jong-un’s demise, although almost certainly false, should serve as a reminder of how dangerous it is to leave the standoff in Korea unresolved.