How Russia Can Help Break the Deadlock with North Korea 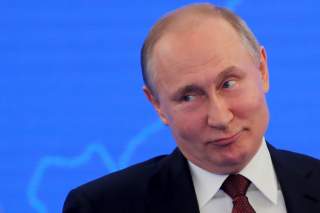 One interpretation of the stunning victory of Volodymyr Zelensky in the Ukraine elections is that Ukrainians are tired of serving as pawns in the New Cold War. On practically the other side of the world from Ukraine, many Koreans might justly feel the same way. While Americans frequently seem to want to divide up the world neatly into black and white camps, those on the actual front lines of these various battlefields are looking for a “third way.” They want peace and prosperity instead of perpetual and costly armed struggle that could end in a catastrophe for all concerned.

Currently, practically everyone is cynical when it comes to North Korea. Grand summitry has come and gone with little to show for it, other than a few days of pageantry. Most American experts are busy piling scorn on the Trump administration for giving Pyongyang the “legitimacy” of standing next to a U.S. President on two different occasions. Still, if we are able to put quixotic notions of a complete denuclearization followed by the opening of a Trump casino and resort in Pyongyang aside, it is still necessary to consider how to stabilize the Korean Peninsula.

The forbidding storm clouds of a looming clash of arms must be banished for the long term, allowing Northeast Asia its full measure of wealth and deserved harmony. To that end, it is worth taking a serious interest in the meeting that will take place in Vladivostok over the next couple of days between Russian president Vladimir Putin and North Korean president Kim Jong-un.

To be sure, the wise-cracking conventional press in the West will enjoy mocking a summit of international “outcasts,” “dreadful dictators,” and “pauper nations.” Late-night TV comedians are certain to have a field day with this event. The critique is not altogether unfounded, moreover, as the two leaders are plainly making common cause, at least in some respect. Most obviously, both Moscow and Pyongyang are on the receiving end of onerous economic sanctions regimes, which have been coordinated for the most part in Washington, DC.

Another theme likely to predominate in the wake of this meeting will be the notion that Russia is competing with China for influence on the Korean Peninsula. While there is a kernel of truth in both of these two rather predictable interpretations, they each gloss over the interesting opportunities that the Kim-Putin Summit raises for actually decreasing tensions in Northeast Asia.

There have been several missed chances for seeking Moscow’s assistance in developing a viable peace process with Pyongyang. It was noted back in the dark days of the 2017 crisis with North Korea that the famous Moscow-based specialist on North Korea Georgy Toloraya had importuned: Our country in these conditions must work in all directions, to convince the Americans and North Koreans of the need to move away from the dangerous line [Нашей стране в этих условиях необходимо работать по всем направлениям, убеждать американцев и северокорейцев в необходимости отойти от опасной черты].

After the Olympic Truce in February 2018, new possibilities appeared. Not long after the South Korean national soccer team stunned the world by ejecting Germany from the World Cup in Russia, President Moon Jae-in showed up in Moscow in June 2018 for another meeting with Putin. At that time, Vladivostok-based international relations expert Artyom Lukin considered it likely that Russia could be uniquely useful to South Korea as a “potentially important bridge that leads to the DPRK [потенциально важный мост, который ведет к КНДР].”

In a somewhat related matter, Russia’s early fall 2018 giant Vostok military exercise—that included some Chinese forces as well—was indeed intended as a show of force to the whole region and particularly the United States. Those wargames illustrated that Russia remains as a major power broker in Northeast Asia. More recently, Georgy Toloraya, a Russian expert with unmatched experience on the ground in Pyongyang, gave an interesting new interview. Asked whether North Korea, after all is said and done, would actually surrender its nuclear arsenal, he said succinctly: “Of course not [Нет конечно].” Yet, Toloraya has not given up on creative diplomacy and neither should America.

Before considering the next moves in this game of chess, one must better understand Moscow’s interests on the Korean Peninsula. Russia’s interest is not—as most frequently and crudely characterized in the conventional Western media—to destabilize its neighbors. Rather, Russia wants to see a calming of tensions that would allow for accelerated economic development.

There are, for example, the long-discussed projects of cooperatively developing the Rajin Port in North Korea, and the even more ambitious concept of fundamentally linking Russia’s rail transport system to all of Korea, including South Korea. Indeed, Moscow’s relatively close ties to Seoul undergird the present outreach initiative. Having witnessed some of the tangible benefits of cooperating closely with Korea, for example enjoying visa-free travel between Russia and South Korea, Russia wants to deepen engagement with the peninsula.

Of course, deeper engagement has the side benefit of diluting China’s rapidly growing influence throughout the region. However, it must be said that one of Russia’s key interests is not to alienate Beijing. Moscow realizes that China will be one of the main actors, or even the primary actor, in calming down tensions on the Korean Peninsula. Again, contrary to the cold war rhetoric so common in Washington, Moscow is also not keen to alienate either America or Japan, because Russia understands that Korea is a primary security interest for both.

And what, after all, might come out of this interesting Kim-Putin summit? Actually, the Russian press is more than a little distracted at this moment by the dramatic events of the Ukraine election, and there has been hardly any serious Russian-language commentary on the matter. However, a lack of coverage could also reflect an official attempt to dampen expectations, or even avoid a spotlight on Putin’s meeting with the leader of a “rogue state.”

One short analysis published in Izvestiya seemed to suggest that the main focus of the meeting would be on the practical issues related to the bilateral economic relationship. For example, up to forty thousand North Korean workers may have to leave the Russian Far East in 2019 to conform to UN sanctions against North Korea. But as one Russian experts explains: “for the Far East this is an essential workforce and their departure would create certain economic problems for us [для Дальнего Востока это существенная рабочая сила, и ее уход создает для нас определенные экономические проблемы].”

The continuing desire to prioritize economic issues will likely encourage the Kremlin that has “[repeatedly expressed the need for easing sanctions, and would reiterate its intention to continue active work in the UN with a view to weakening the restrictions against the DPRK in response to certain steps by Pyongyang to reduce tension [уже не раз высказывавшаяся за необходимость смягчения санкций, вновь заявит о намерении продолжить активную деятельность в ООН с целью ослабления рестрикций против КНДР в ответ на определенные шаги Пхеньяна по снижению напряженности].” This discussion also notes that North Korea has been one of the few countries to actively support Moscow’s claim to Crimea and that Russian leaders had previously welcomed Kim’s father, Kim Jong-il, on a visit to Russia back in 2011. A Russian diplomat is quoted as observing that Kim Jong-un is “an impulsive person [человек импульсивный],” so there could be some surprises.

The tone of a second brief Russian-language analysis published recently in Kommersant sounds a bit more hopeful, at least from the American perspective. The author of this piece observes that “Russia is returning to the role of a key player in the region [Россия возвращает себе позиции ключевого игрока в регионе].” This piece makes the interesting observation that White House Special Envoy for North Korea Steve Beguin has just made a visit to Moscow. Moreover, the article observed that this was apparently not his first meeting with the Kremlin’s top East Asia diplomat, Igor Morgulov, with another held previously in 2019.

Additionally, the article mainly focuses on how Putin’s summit with Kim might actually build momentum for a third summit meeting between Kim and Trump. The author asserts that this is logical given that the success of a third Trump-Kim summit “would be largely dependent on the efforts of intermediaries Beijing and Moscow [будет во многом зависеть от усилий посредников — Пекина и Москвы].” Indeed, assistance from Moscow in helping to put the troubled Pyongyang-Washington negotiating track back together would be most welcome. Of course, it’s far from clear that “Humpty-Dumpty” can actually be put back together again.

Yet, for all the pervasive pessimism, it should be noted that Moscow could do even more to facilitate an agreement on North Korea’s nuclear program. Why? First, Russia obviously has not only the technical expertise to assist with verification, but it also has vast experience with arms control negotiations and crisis management too. Second, it is on good terms with both China and also South Korea, but Russia may be more trusted in Pyongyang for the simple reason that it does not really pose an existential threat to Pyongyang in the way that either Seoul or Beijing might. Finally and most importantly, Russia’s continual focus on military power earns it a certain amount of credibility in a tough neighborhood. The Kremlin’s willingness to stand up to the West for unpopular allies (whether in Syria or Venezuela) has undoubtedly been noticed in North Korea. For all these reasons, Russia could play a key role in hammering out the most difficult stages of a “final,” and workable nuclear arms control agreement that might be short of complete, verified, irreversible denuclearization, but yet still caps North Korea’s program at an acceptably low level and thus significantly cools tensions that are once again on the rise.