How Trump or Biden Should Handle North Korea: Partner with Moon Jae-in 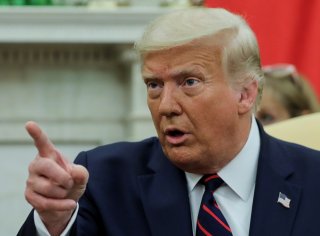 Americans are waiting on the results of the November election. So are foreign governments. That should be expected given the fact that the U.S. possesses the world’s largest economy and most effective military.

More important, though is the willingness of American policymakers to use the armed forces. Denizens of Washington really believe that they are anointed, either by heaven or fate, to rule the world.

Among the countries most concerned about November’s outcome is South Korea. There has been confrontation and conflict on the Korean peninsula since 1945, when the Japanese colony was divided between the U.S. and Soviet Union. Separate states were declared in 1948. Two years later the Democratic People’s Republic of Korea invaded the South. Roughly three years of war resulted, drawing in the U.S. and China.

Beijing ultimately withdrew, but American military forces remained. And Washington dominated the Republic of Korea, even after the latter recovered economically and instituted democracy. Today President Moon Jae-in is essentially a hostage to U.S. sanctions policy. Elected by the Korean people and backed by an overwhelming majority in the National Assembly, he paradoxically has limited control over his nation’s policy toward the DPRK.

Although Seoul has greatly benefited from America’s defense guarantee—the ROK developed behind that military shield, and now enjoys one of the world’s dozen largest economies—it also was infantilized by its reliance on the U.S. Washington does not have, never has had, and least in the near future never will have, equal partners. America’s job, in the view of Washington policymakers, is to make all important decisions. U.S. allies are supposed to simply follow orders. That certainly is the case for South Korea.

Washington is the main driver of allied policy toward North Korea. That means no official relations. Escalating sanctions. And threats of war. Never mind whether this is good policy from America’s standpoint—it isn’t. Even more obviously, it was often counterproductive for South Korea.

For instance, proposals for military strikes on North Korean nuclear sites, reaching back to the Clinton administration, almost certainly would have triggered a general war with catastrophic consequences for the ROK. South Korean leaders, such as President Kim Young-sam were reduced to demanding, pleading, and insisting that Washington not start the Second Korean War.

Thankfully, the Trump administration abandoned its irresponsible warmongering threats in fall 2017 and has not resurrected them. However, U.S.-enforced sanctions prevent Seoul from pursuing economic engagement with the North.

Commercial restrictions have hit the North, hard, especially in conjunction with the coronavirus pandemic. However, they have not caused Pyongyang to surrender its nuclear weapons. Disarmament proved fatal to Libya’s Muammar Khadafy, an episode undoubtedly well remembered in Pyongyang. And no sane foreign leader would trust Washington not to take advantage of even a brief moment of weakness in the future. Despite officially endorsing stability overseas, the U.S. is a radically revisionist power, ever willing to oust regimes on its naughty list. Kim Jong-un is many things, but he is no fool, willing to entrust his dynasty to Washington’s benevolent forbearance.

Given the minimal chance that North Korea will abandon nuclear weapons, promoting détente, stability, and peace through other means remains a crucial objective for Seoul. Achieving a positive result won’t be easy, but the effort is essential. Which requires not just allied coordination, but Washington’s willingness to allow the South to take the lead. So far, the Trump administration has refused to do so. But how about a potential Biden administration?

The vast majority of members of what Ben Rhodes famously called “The Blob” are attempting to clamber aboard the Biden express. While Trump is no isolationist, his vaguely Jacksonian unilateralism is unsatisfying for those who believe they were born to run the world. Nowhere is the scramble more frenzied, even vicious, than among neoconservatives, desperate to launch their next war. The Trump years have been sadly barren for those whose fondest hope is playing field marshal by invading other countries, sowing regional chaos and discord, slaying perceived enemies of all that is good and decent, and playing social engineer around the globe.

What Joe Biden actually believes is unclear—he said he is open to meeting Kim but would place “conditions” on any talks. Kamala Harris appears to favor negotiation, but her role in foreign policy might be small, if that. And there is much speculation that Biden himself would prove to be little more than a figurehead, with nothing much to do with policy formulation. If so, who would take the lead is at best a matter of speculation.

At the moment, post-election planning, whatever the official claim, is a minor sideshow. If the candidate does not win, there is no transition, let alone administration. So most effort goes into the campaign. However, on November 4 the next administration will effectively begin. If Trump wins, nothing much is likely to change. If Biden triumphs, transition planning will begin in earnest. In which case Biden’s foreign policy planners should reach out to the ROK.

No one in Washington or Seoul, except perhaps the two presidents, believes that the North will abandon its nuclear arsenal. However, arms control might be possible, especially if accompanied by economic and political engagement. And the country best able to promote better relations is South Korea.

Thus, if Biden wins, his transition and the Moon government should immediately begin talking. Although Kim Jong-un is unlikely to stage a long-range missile or nuclear test before the election, he might decide that the interregnum after a Biden victory would be a perfect moment to challenge the incoming administration with little chance of retaliation by the existing administration. It would be best for the Moon government and Biden administration to be on the same policy page, ready to act, at noon on January 20.

The new U.S. president could most advance the prospects for peace by publicly encouraging the North to engage with Seoul. The Kim regime has spent that last couple years denigrating the Moon government, but that likely is because Pyongyang recognizes that America is in control. A Biden administration should publicly empower the ROK, noting that the U.S. objective is for the two Koreas to reach an accommodation. Washington’s role is to backstop the South, no more.

Even then the future would be highly uncertain, of course. The DPRK faces an economic crisis. Politics there remains arcane and obscure: observers simultaneously claim that Kim’s sister Kim Yo-jong is his unofficial number two and comment on her mysterious absence from recent high-level meetings. Nevertheless, President Donald Trump deserves credit for having opened communication channels between Washington and Pyongyang. He, or Joe Biden if the latter is elected president, should do their best to improve ties between North and South.

Much is at stake on November 3. And not just for Americans. The peoples on the Korean peninsula also are waiting and wondering who will take the oath of office as America’s president on January 20. Whichever candidate wins, he should make President Moon Jae-in his close partner in dealing with North Korea.