How Will Joe Biden Handle a Nuclear North Korea? 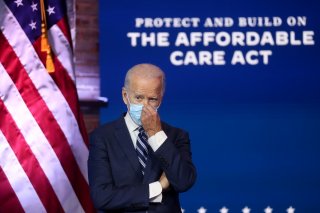 The inauguration of presumptive President-elect Biden on January 20th, 2021 will usher in another chapter in the United States’ fraught relations with a nuclear-armed North Korea. The Trump Administration tried summit diplomacy from 2018 through to 2019, after a year of high tensions in 2017, in which threats of ‘fire and fury’, and nuclear brinkmanship rose to alarming levels. The summit diplomacy – as expected – failed to reverse Pyongyang’s continued determination to build up its arsenal of nuclear weapons and long-range ballistic missiles.

For a President Biden, the reality would be that North Korea will not, under any circumstances, denuclearize, no matter what concessions the United States might offer as part of any future ‘principled diplomacy.’ Biden must work on the basis that North Korea is a nuclear weapons state in every sense of the term.

A return under Biden to the Obama approach of ‘strategic patience’ is highly unlikely, simply because it achieved nothing, and instead only gave North Korea time to develop more capable nuclear forces. Biden knows that North Korea isn’t going to stop developing new nuclear and missile capabilities. New submarine-launched ballistic missiles and road-mobile solid-fueled ICBMs are probably high on Kim’s agenda after revealing the massive liquid-fueled Hwasong-16 ICBM at the 75-anniversary celebrations in October.

The North Koreans have called Biden a ‘rabid dog’ that should be ‘beaten to death’, so it seems unlikely that Kim will send love letters as he supposedly did with Trump. Instead, Kim is more likely to test the Biden Administration with new missile tests, including the prospect of resuming long-range ballistic missile testing – and the potential for a new nuclear test. The hope would be that Biden would respond meekly and be cowed into diplomacy that leads to concessions to Pyongyang, with North Korea giving little or nothing in return.

That’s unlikely to succeed, with Biden sharing none of the adoration of Kim that Trump clearly developed during the summit diplomacy. Instead, another North Korean long-range missile test would only prompt the U.S. under Biden to move swiftly to reverse the erosion of the U.S.’ relations with South Korea, and to strengthen the relationship with Japan, and a nuclear test would reinforce U.S. incentive to push back hard against Pyongyang.

The costs of a return to missile and nuclear testing should be clearly communicated to Pyongyang by Biden early after his inauguration, and he should move to add substance to rhetoric by quickly strengthening U.S. extended nuclear deterrence security guarantees to both Seoul and Tokyo. Such a step would enhance confidence on the part of U.S. allies over the commitment of Washington to meet a challenge posed by North Korea’s nuclear arsenal. It would send a clear signal to Pyongyang, not to act in an irresponsible manner.

Such a move presents its own challenges for the U.S. Biden is yet to formally announce his administration’s stance on nuclear forces, but strengthened extended deterrence would run counter to the Democrat 2020 platform of adopting a sole-purpose declaration posture for U.S. nuclear forces. U.S. non-nuclear prompt-strike capabilities for pre-emptive deterrence aren’t mature enough to provide an alternative to traditional nuclear deterrence. Biden may find that the growing nuclear and missile threat posed by North Korea mitigates against changing U.S. nuclear posture prematurely.

It is likely that with efforts by a Biden Administration to strengthen extended nuclear deterrence and repair damage done to key defense relationship with Seoul after destructive bickering over the financial aspects of hosting US forces in South Korea, Pyongyang recognizes that the window for diplomatic engagement with the U.S. is closing. The economic sanctions will remain in place, there will be no peace treaty or U.S. withdrawal of forces, and all Kim will have left will be his nuclear stick.

For Kim, this is a trap of his own making. Rather than accept the opportunity for denuclearization in return for the lifting of sanctions, and a peace deal that could eventually see reducing tensions on the peninsula, and one day, the possibility of some form of reunification, North Korea remains defiantly unwilling to denuclearize. The U.S. can’t give Pyongyang concessions without something in return. A token gesture, such as the offer of once again closing Yongbyong made by Kim in the Hanoi summit in 2019, really comes over as trying to sell the same horse twice. Its not a serious move towards denuclearization. For Kim Jong-un considering how to approach a Biden Administration, a step-by-step engagement with the U.S.-based on a real and verifiable arrangement of step-by-step denuclearization in return for U.S. and allied economic and political engagement would be the enlightened path. Its not going to happen and expect a new period of increasing tensions in the future.

Malcolm Davis is a Senior Analyst in Defence Strategy and Capability at the Australian Strategic Policy Institute in Canberra, Australia. His research specialization is on space policy, future military technology and Indo-Pacific geopolitical analysis.