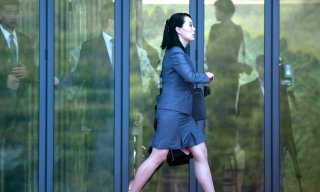 The Democratic People’s Republic of Korea (DPRK) regime could survive the death of Kim Jong-un.

The established pattern of hereditary succession suggests Kim’s younger sister, Kim Yo-jong, would most likely replace him. She has risen quickly to senior status in recent years. Older brother Kim Jong-chul is a possible dark horse candidate, but his father long ago dismissed him as a potential leader and he holds no significant political position.

Examples of short-lived successors such as Hua Guofeng in China and Georgy Malenkov in the Soviet Union come to mind. The question also arises whether a traditionally patriarchal civilization with limited penetration by modern social trends would accept a young woman as its paramount leader. The North Korean state, however, is a special case because of its emphasis on familial connections with Kim Il-sung for regime legitimacy. A female paramount leader in this neo-monarchy is not out of the question. The last Korean ruler over northern Korean prior to Japanese occupation was Empress Myungsung, who ascended to the throne at age 16. If the family connection is essential, experience and competence are not. In 2010 the top DPRK generals tolerated the promotion of Kim Jong-un, then in his mid-twenties and with no military experience, to four-star general. The continuation of Kim Il-sung's bloodline provides cover for the favored class to maintain the status quo. Thus, Kim Yo-jong plus a hand-picked regent is the likely core of a successor government.

The death of Kim Jong-un will lead to uncertainty in U.S.-DPRK relations. The personal relationship between the two national leaders would be gone. A period of introversion by North Korea might follow, in effect a hiatus in bilateral relations. But equally likely is an increase in tensions on the Peninsula.

The DPRK government has a long history of fearing subversion, military attack, and attempted decapitation. The post-Kim Jong-un leadership might try to overcompensate for its sense of increased internal and external vulnerability by relying on its accustomed bravado, sending intensified signals that it stands ready for war and will retaliate with all of its capabilities, including nuclear weapons, at the slightest sign of aggression by its adversaries. That would raise tensions on the Peninsula and inevitably increase the risk of an unintended war. There might be an external acceleration of these tensions as well if the U.S. government feared the command and control system for North Korea’s nuclear weapons had broken down and intervention was necessary to neutralize them.

Dealing with an apparent leadership vacuum in North Korea would likely worsen the friction between Washington and Seoul, which have both different priorities and different preferred tactics toward North Korea.  An intrusive American approach would also raise the possibility of conflict with China at a time when that bilateral relationship as well is strained.

Would Kim Jong-un's death lead to a change in the regime’s basic policies? He presumably would have named a successor and close advisors who had earned his trust that they would continue down his chosen path. A popular uprising is unlikely because the general populace has no means of organizing and arming itself for a march on the capital. The residents of Pyongyang are relatively privileged citizens who benefit disproportionately from the continuation of the regime. The Kims have also taken good care of the military.

Factionalism within the North Korean elite could reorient decision-making. Bits of evidence suggest DPRK elites have disagreed over such issues as economic reform, closeness to China, rapprochement with the United States, and whether to trade away nukes. The death of the paramount leader would be an opportunity for powerful groups to reassert their preferences, and for the new leader to reassess grand strategy once she had consolidated power. The best outcome would be a decision to seek permanent peace with Seoul—alas, perhaps too much to hope for.