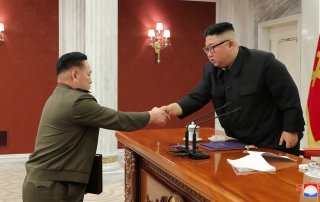 South Korea is planning to spend millions of dollars on a new system to analyze information in North Korea, using such technologies as artificial intelligence and big data.

That’s according to a report this week by NK News, which put the price tag on the South Korean Ministry of Unification’s plans at $8 million.

The site translated an “urgent notice,” posted to a Korean-language South Korean government jobs website, which listed the project’s budget of  8.97 billion won (which is the equivalent of $8 million.)

Per the listing, “the system will harness the power of artificial intelligence to analyze photos, videos, documents and audio files related to North Korea that are obtained in real-time, as well as media already obtained and stored by the unification ministry. It will also aim to use this information to automatically create reports on North Korea and create ‘artificial intelligence-based inferences’ on what is about to happen in the DPRK.”

Of that budget, the project will devote $444,632 to “big data analysis,” while budgeting $5.3 million to “developing and implementing software,” with $2.2 million being spent on the project’s operating system.

“There is a need to come up with ways to support unification policy, exchange and cooperation, as well as inter-Korean meetings through assisting the North Korean information analysis and assessment work real-time using AI and big data,” the unification ministry said last month, per NK News.

Back in January, it was reported that South Korea was working on a video conferencing room, at a cost of $360,000, specifically for high-level negotiations and discussions with North Korea.

“The reason why we have decided to build the video conference room is to preemptively prepare for inter-Korean conferences that do not require physical contact,” South Korea’s Unification Ministry said at the time. The government had an eye towards finishing the videoconferencing room by this April.

The president of South Korea, Moon Jae-in, had said earlier this year that he would meet with North Korean leader Kim Jong-un “anytime, anywhere,” although the videoconferencing initiative was underway prior to then.

In 2020, North Korea not only cut off talks with South Korea, but there were reports of an explosion at the Inter-Korean Liason Office in the Kaesong Industrial Zone. However, a subsequent report from 38 North stated that while damaged, the building remained standing following the explosion.

According to the recent National Geographic documentary North Korea: Inside the Mind of a Dictator, Kim’s sister Kim Yo-Jong was the driving force behind the decision to blow up the liason building in the Kaesong Industrial Zone.