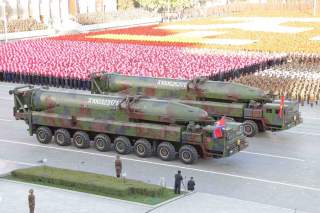 Jokesters say it’s best to be a pessimist: you’re either right or you’re pleasantly surprised. I am very much a North Korea pessimist. If you survey nuclear history, you see that nuclear weapon states seldom give up that capability after going to all the trouble, costs, and hazards of obtaining them. South Africa did it, but that was in the context of the death of the apartheid regime. And the few outliers that did relinquish nuclear weapons probably regret the decision. Ukraine is one such outlier. Had it retained that fraction of the Soviet arsenal housed on Ukraine’s soil when the Cold War ended, Russia might not be so quick to detach territory from that country, support “little green men” waging irregular warfare in eastern Ukraine, or interfere with shipping entering or exiting the Sea of Azov. Forego the capability and you forego nuclear deterrence. That’s the lesson of nuclear disarmament as Kiev and other current and aspiring nuclear weapon states see it.

Yes, of course, war remains a mathematical possibility, but I have a hard time seeing it break out other than through an accident or miscalculation. Pyongyang understands the magnitude of forces arrayed against it very well and would blanch at cutting loose with nuclear weapons. The United States and its allies would blanch at the costs of forcible disarmament. We lost some 37,000 lives in the Korean War, a figure that dwarfs the casualty count from the war on terror, and that’s without a nuclear exchange. Use the Korean War as a crude benchmark. Would we accept similar costs and loss of life to disarm North Korea today? I doubt it. And this leaves aside South Korean views. Our Korean friends know very well that they live in the combat theater, under the shadow of North Korean guns and missiles. I would expect a U.S.-led counterproliferation campaign to meet stiff headwinds in Seoul even apart from the forbidding cost/benefit calculations associated with such an enterprise.

So I hope to be pleasantly surprised, but I imagine this is the right take on the situation. Be pessimistic.