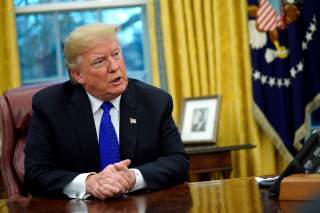 Despite the good feelings developed between Trump and Kim during their meeting in Singapore, little progress has been made since then in defining how to achieve the agenda set in their joint statement. The outline established was broad, but the path was clear: denuclearization and transforming bilateral relations must advance hand in hand. However, the actions the United States has taken since the Singapore summit have done little to instill confidence that a new bilateral relationship is even possible.

While the U.S.-South Korea joint military exercises were suspended, America renewed the travel ban of U.S. citizens to North Korea. Moreover, America imposed unilateral sanctions on Democratic People’s Republic of Korea individuals and entities and continued to champion the maximum pressure campaign. Furthermore, Washington practically cut off U.S. humanitarian assistance to the North while expecting Pyongyang to take substantive moves to either give up or at least cap their nuclear weapons program. All of these are not the actions of a country trying to promote a new era, but rather signify that the old relationship prevails.​

The efforts of Kim, Moon and Trump in 2018 have created the potential for this round of negotiations to be far-reaching. But traveling down that road has to be a choice made by all three, garnering support from other key stakeholders such as China and Russia. Kim seems willing to risk taking bold moves as he lays out a vision of prosperity for North Korea. Moon has shown he’s committed to improving South Korea’s security situation and restarting economic cooperation that will benefit both Koreas. But for the United States, it will require Trump to translate his personal feelings toward Kim into actual state to state relations. This is a risky venture, since the political baggage on the North Korea nuclear issue in Washington runs deep and skepticism is high. Certainly, there are no guarantees of success in any negotiation, but failure is guaranteed if we continue to present the same proposition that has preserved the status quo for years. And failure on the U.S.-DPRK front will mean setbacks and potentially reversals on the inter-Korean agenda as well.

A second U.S.-DPRK summit will be telling of how relations evolve in 2019. Trump has the opportunity to reset the U.S.-DPRK agenda, establishing a few tangible and achievable actions both sides can take to move forward on the agreement set in Singapore. This movement would help Moon maintain momentum on the inter-Korean front as well. But walking away from a second summit without a shared understanding and expectations of next steps will likely lead to greater frustrations on all sides, the consequences of which are hard to predict.

Jenny Town is a Research Analyst at the Stimson Center and the Managing Editor and Producer of “38 North,” a web journal that provides policy and technical analysis on North Korea. She is the former Assistant Director of the U.S.-Korea Institute at Johns Hopkins School of Advanced International Studies.