For Joe Biden, Restoring the ROK-U.S. Alliance is Critical for Any Successful North Korea Policy 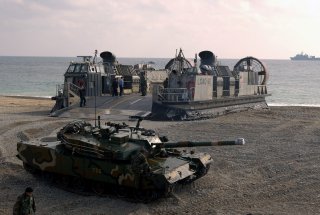 The incoming U.S. administration faces an uphill battle on the Korean peninsula. While North Korea continues developing and showcasing new weapons, the ROK/U.S. alliance has become more strained. Consequently, President-elect Biden needs a new strategy for the peninsula that prioritizes restoring trust and strength to the alliance. If they achieve that goal, Washington and Seoul could then impose sufficient pressure on the Kim Jong-un regime to change its strategic calculus regarding nuclear weapons.

The first objective of Biden’s new Korea plan should be resolving two key differences that could undermine trust in the alliance. These disputes have emerged first over the transition of wartime operational control (OPCON) from the U.S. to South Korean militaries and second over the unresolved burden-sharing negotiations regarding the cost of stationing U.S. troops in Korea.

Biden’s team must make clear to its South Korean counterparts that Washington fully supports the OPCON transition. One key misperception that has exacerbated mistrust in Seoul is that the U.S. wants to obstruct the transition, which is not true. Rather, Washington seeks to meet the conditions for a successful transition laid out by the U.S. and South Korean militaries rather than pursue a timeline-based process rooted in President Moon Jae-in’s political goal of completing the transition before his term ends in 2022.

During the 46th ROK-U.S. Security Consultative Meeting in 2014, the allies decided on a conditions-based OPCON transition, as part of which the South Korean military would need to meet specific preconditions and be certified in 155 mission essential tasks to ensure all branches of its military have the necessary weapons and capabilities to uphold the security of Korea. The three broad preconditions include the ROK military’s acquisition of certain military capabilities necessary for a combined defense posture, the development of systems to effectively counter North Korean ballistic missiles, and the establishment of a security environment around the Korean Peninsula conducive to OPCON transition.

President-elect Biden’s team must also complete the ongoing negotiations for a new Special Measures Agreement (SMA), which is the equitable cost-sharing pact for U.S. troop stationing in South Korea. Amid the dispute over the SMA, the  Trump administration appeared to consider a significant reduction or withdrawal of U.S. troops from Korea. The purpose of this implied threat was to persuade Seoul to meet Washington’s unrealistic and exorbitant demands to increase South Korean financial contributions for stationing U.S. troops.

The Trump administration’s actions damaged the unity of the alliance and heightened mistrust in Seoul regarding the long-term reliability of the U.S. as a security partner. Fortunately, in a special op-ed published in South Korea’s Yonhap News Service on October 30, President-elect Biden reassured Seoul he will not threaten to remove U.S. troops from Korea as Trump did.

In this context, the Biden administration must complete the SMA negotiations in accordance with the Status of Forces Agreement (SOFA) process. A SOFA is an agreement for a foreign nation to station military forces in a host country. The completion of SMA talks will ensure that the incremental costs for the stationing of U.S. troops in Korea are properly distributed between Seoul and Washington. In turn, the two countries will determine the proper amount of funding through mutual dialogue rather than by unilateral demands. As part of the agreement, the U.S. and South Korea should return to the practice of updating the SMA only once every five years to reduce unnecessary friction in the alliance and provide financial stability and accountability and resource continuity.

The other component of a successful Korea strategy for the new Biden administration should be reaching a shared consensus with Seoul on the fundamental nature of North Korea’s Kim family regime, its strategies, and its objectives.

The Moon administration is currently laboring under the false assumption that Kim Jong-un shares Seoul’s vision for peace and reconciliation. Seoul’s leadership seeks to initiate economic, cultural, and humanitarian engagement projects to build trust toward peace with North Korea. Unfortunately for Moon, Kim Jong-un has rejected the South Korean leader’s olive branches. Instead, Kim has continued his family’s political warfare strategy of using military provocations to force its adversaries to provide concessions, such as premature sanctions relief, and to de-escalate tensions by forcing U.S. and/or South Korean concessions.

Washington and Seoul must avoid making the mistake of ceding to Kim’s demands just to bring him to the negotiating table. Kim Jong-un will only view such a capitulation as weakness and will then demand more.

Biden therefore should remind Moon that the alliance must develop a new strategy that aims to break Kim’s adherence to his family’s diplomatic playbook. Biden and Moon should retain the existing strategic working group that brings together personnel from the U.S. State Department and South Korean Foreign Ministry, so the working group can craft and adopt the new strategy.

Once Washington and Seoul reach this consensus, the alliance can focus its efforts on pursuing future working-level negotiations with North Korea. Such talks will require the U.S. and South Korea to support diplomacy with a comprehensive pressure campaign utilizing all levers of alliance power. This includes sustained and combined military readiness to provide the foundation for diplomacy.

Additionally, the allies must not prematurely lift sanctions and, more importantly, must continue enforcing these measures to remind Pyongyang that its nuclear and missile pursuits bear enormous financial costs that could threaten regime survival.

Such an aggressive approach may elicit criticism suggesting these measures are intended to force regime collapse in North Korea. Yet this is not the case at all. Rather, imposing pressure is meant to prevent conflict or instability by forcing Kim to feel a greater urgency to surrender his nuclear weapons in exchange for regime survival.

Outside pressure from the U.S. and ROK should increase internal pressure in Pyongyang. Specifically, Kim’s party and military elites expected him to have gained sanctions relief through his summits with Trump.  North Korea’s economy continues to falter due to a confluence of factors, including sanctions, Kim’s prioritization of nuclear weapons and missiles over his people’s livelihood, the impact of COVID-19 on North Korean trade activity, and natural and humanitarian disasters. Over time, Kim may be forced to adopt a new strategy to placate the growing impatience within his regime for his inability to execute his political warfare strategy.

Without effectively changing Kim’s strategic calculus, the U.S. and South Korea’s diplomatic efforts will be pointless, because Pyongyang will continue exploiting both working-level and senior-level negotiations to reap benefits for itself without giving up anything in return.

If President-elect Biden aims to “keep pressing toward a denuclearized North Korea,” as he put it in his Yonhap News Service op-ed, he must first prioritize reinforcing Washington and Seoul’s rock-solid bond based on shared values and combined military strength. This foundation is essential for the alliance to engage and negotiate with Pyongyang from a position of strength, not appeasement.

David Maxwell, a 30-year veteran of the U.S. Army and a retired Special Forces colonel, is a senior fellow at the Foundation for Defense of Democracies (FDD), where Mathew Ha is a research analyst. Follow David and Mathew on Twitter @davidmaxwell161 and @matjunsuk. FDD is a Washington, DC-based, nonpartisan research institute focusing on national security and foreign policy.