Joe Biden Should Make a Peace Offer to North Korea 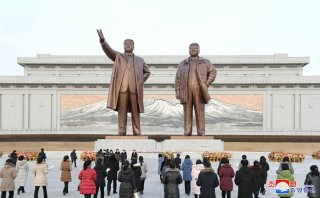 No, hostilities did not break out overnight. Nobody pushed their nuclear button, big or small. Wikipedia has not added a listing for the Second Korean War.

Rather, the original Korean War never ended. An armistice took effect on July 27, 1953, halting the firing. But a state of war formally remains. And violence has often flared over the years, as North Korea sought to destabilize the ROK and embarrass the United States.

Relations on the peninsula remained very cold even when the Cold War ended and Soviet Union dissolved. Around that time the North’s nuclear program became an issue. Whether Pyongyang ever was willing to give up what then was only potential nuclear weapons is unknown. However, in the intervening years, the three reigning Kims amassed a sizable arsenal, perhaps as many as two or three score nuclear weapons.

The likelihood of the DPRK voluntarily disarming now is vanishingly small. A few Panglossian hawks imagine that turning the sanctions screw a few more times would finally break Kim Jong-un’s will—in their view, we are always but one penalty away from final victory. Alas, this forlorn band has been rapidly diminishing in size over the years. Far more likely, Pyongyang will insist on keeping a minimal deterrent even if it proves willing to negotiate a future limit.

U.S. officials could still maintain the pretense that they expect full denuclearization of the North. After all, a disarmament agreement is a logical prelude to denuclearization. In any case, neither is likely without an improved relationship between Washington and Pyongyang.

At the Singapore Summit Kim and President Donald Trump agreed to the path forward, starting with better bilateral and regional relations. Unfortunately, that effort stalled after the collapse of the Hanoi summit. President Joe Biden should seek to revive efforts to improve relations before expecting denuclearization. Proposing a peace declaration and negotiations for a peace treaty would be a good start.

The group Korea Peace Now! recently issued a report on the issue: Path to Peace: The Case for a Peace Agreement to End the Korean War. Administration officials should take note as they conduct a policy review.

In the group’s view, the unresolved conflict is central to problems on the peninsula today. There obviously is an important difference between lack of active hostilities and peace. The former could turn hot at any moment.

Explained the report: “Despite years of negotiations, the United States, North Korea, and South Korea remain locked in a dangerous standoff. This stalemate perpetuates the worsening security crisis on the Korean Peninsula, which poses an existential threat to millions of people. This crisis is a direct result of the unresolved Korean War, which was halted only by a fragile armistice and is the root cause of tensions and hostilities on the Korean Peninsula. The unresolved state of the Korean War fuels increasing militarization and carries major political and economic costs.”

All true. Thus, the administration should dive deeper when dealing with the North. Improve the fundamentals, that is, U.S.-DPRK relations and regional dynamics. Succeeding at that would make arms control more likely. Not inevitable—nothing involving Pyongyang is certain. Nevertheless, if the administration is serious about seeking denuclearization, then it should adopt policies that make that outcome more likely.

Korea Peace Now! advocates a peace agreement, which “would bindingly end the state of war.” The group wants something that “would reduce the risk of nuclear war and facilitate talks on disarmament or arms control.” Korea Peace Now! also believes that such a peace agreement “would improve people’s lives, sap the militarism that undergirds abuses, and create the conditions to engage more effectively on human rights.” The organization supports a formal treaty: “Other commonly proposed instruments, such as end-of-war declarations, nonaggression agreements, or normalization agreements, do not necessarily end a state of war.”

While worth the effort, it is important not to oversell the value of treaties. Kim Jong-un’s signature would not ensure peace. No paper guarantee can shield Seoul from an artillery barrage, tank attack, missile strike, or nuclear explosion. Indeed, consider the fate of the most famous peace treaty, the 1928 Kellogg-Briand Pact, which outlawed war. Termed an international kiss, it took effect on July 24, 1929. Ten years, one month, and one week later Germany invaded Poland, triggering the worst, most hideous conflict in human history.

Moreover, a simple peace treaty might prove difficult to negotiate. The parties would be tempted to try to turn any treaty into the equivalent of a legislative “Christmas tree,” including provisions which, no matter how desirable, would be more controversial and thus make an agreement less likely.

Further, with the GOP Senate caucus filled with uber-hawks constantly pushing for war, such as Lindsey Graham (nuclear war “over there” would be no big deal) and Tom Cotton (“put more force … behind our diplomacy”), there might not be a two-thirds majority for any treaty which makes peace with North Korea rather than accepts its surrender. Better to pair a peace declaration, which the Biden administration could issue unilaterally, with a commitment to negotiate a formal treaty.

Such an effort would have four major advantages. The first would be to stop treating mutually advantageous steps as benefits only for the North, and hence shameful “appeasement.” Imagine insisting that calling the Korean peninsula a peninsula was somehow a giveaway to Kim Jong-un. That would be absurd, yet many American policymakers claim that recognizing another reality, the Korean War has ended, is a concession to the DPRK.

Similar is concerted opposition against initiating diplomatic relations with the North. It is more important to have regular contact and communication with dangerous adversaries than well-meaning friends. Imagine trying to resolve the Cold War’s many challenges had Washington and Moscow no open channel to talk. In contrast, would anyone have worried if America and Belgium (or the Netherlands, or Switzerland, or New Zealand) had no contact? The Biden administration should not be afraid to propose measures that benefit America just because they also would benefit North Korea.

Second, this approach would strengthen the negotiating process. North Korea’s concentration of authority in Kim makes it difficult to discuss nuclear weapons. Engaging in talks over another issue, serious but not as fundamental, might help establish a more regular and productive diplomatic channel with the North. No effort at simple disarmament, let alone denuclearization, can succeed without far greater involvement of diplomats and specialists on substantive details and technical issues.

Third, declaring and negotiating peace would respond to Kim’s insistence that Washington eliminate its “hostile policy.” Anything said by anyone in Pyongyang might seem suspect. However, even America’s generally hawkish policy community advocates continuing to press for denuclearization. If that effort is not intended to be purely symbolic, then Washington must address the conditions set by Kim.

In Singapore, he agreed to a three-step process that, North Korean diplomats since have reemphasized, was intended to order future negotiation. Improve bilateral relations and regional security, then move to denuclearization. America’s policy toward the DPRK remains obviously hostile—Washington isolates the North in almost every way possible, including banning travel there. Agreeing to a peace treaty would be a very public step away from this stance.

Finally, such a pact would force the Senate militarist caucus, otherwise known as the Republican Party, to confront a measure that seeks to move the peninsula toward peace. The great flaw with the Joint Comprehensive Plan of Action with Iran was that it was not a treaty. Had it been ratified and supported by the Senate, it would have been much more difficult for President Donald Trump to have charted his disastrous confrontational course with Iran, which left the Persian Gulf more dangerous, the Middle East less stable, and Tehran closer to acquiring a nuclear capability. Presenting a peace treaty with Pyongyang to the Senate would force Republicans to publicly declare whether they are willing to countenance even one small effort to advance peace on the peninsula or are determined to push a military outcome, irrespective of the cost.

Korea Peace Now! deserves credit for pushing Washington to have a conversation about Korea that most policymakers would prefer to avoid. South Korea may be America’s most dangerous alliance commitment. The Biden administration should look for new mechanisms to reduce tensions. Negotiating a peace treaty would be one.