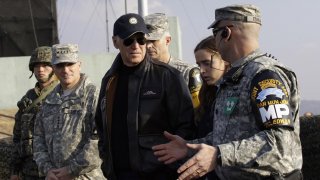 If elected, then Joe Biden would bring decades of experience dealing with the North Korea nuclear issue. His years on the Senate Foreign Relations Committee and eight years as vice president, have prepared Biden to deal comprehensively and expeditiously with North Korea. I believe his strategy for dealing with North Korea will focus on the core issues: North Korea’s nuclear weapons and ballistic missiles and the goal of achieving a complete and verifiable dismantlement of the North’s nuclear weapons and facilities, in exchange for security assurances, economic development assistance and a path to normal relations with the United States.

As president, Biden will inform North Korea of his willingness to negotiate with them to achieve an equitable resolution of issues with the North, proposing substantive working-level meetings with senior negotiators from the United States and the North. If those meetings are productive, with commitments from North Korea to denuclearize completely and verifiably, within a certain time frame, in exchange for security assurances, a peace treaty, economic development assistance and the lifting of all sanctions, and a path to normal relations with the United States, then a leadership summit between Joe Biden and Chairman Kim Jong-un could be held to memorialize the agreement.

During these working-level meetings, the United States would be in routine communications with South Korea and Japan, to ensure that both allies are in agreement with the U.S. handling of negotiations. If there’s progress with negotiations, then South Korea would be encouraged to pursue an intra-Korea dialogue on humanitarian and economic issues while Japan pursues a direct dialogue with the North on the status of those Japanese nationals previously abducted by North Korea, with the prospect of normal relations once this and the nuclear issue are resolved. China and Russia will also be consulted during this process.

Any backsliding on the part of North Korea with respect to complete and verifiable denuclearization would result in a halt to negotiations and the re-imposition of sanctions.

Joseph R. DeTrani was the former Special Envoy for negotiations with North Korea. These are his views and not any government agency or department.