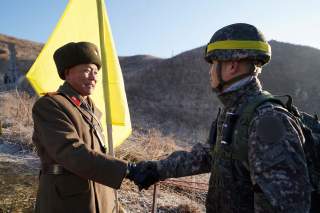 Compared to 2017, 2018 was relatively calm, with no nuclear tests of missile launches. In 2017, North Korea conducted its sixth nuclear test of claimed thermonuclear weapons and successfully flight-tested more than a dozen missiles. Those missile tests included an intercontinental ballistic missile (Hwasong-14) capable of targeting the continental United States. Kim Jung Un apparently made the strategic decision in 2018 to focus on North Korea’s failing economy, claiming that North Korea now had a viable nuclear deterrent. In 2018, Kim Jung Un embarked on a diplomatic mission to improve relations with South Korea, the United States and China. Three summits with South Korean President Moon Jae In, a June summit with President Donald Trump and three meetings with Chinese President Xi Jinping, all in 2018, convinced many that North Korea was prepared to abandon its nuclear weapons. The June 12th Joint Statement with President Trump committed North Korea to complete denuclearization in return for security assurances, economic development assistance and an end to the Korean War.

It has been over six months since the June 12th North Korean commitment to complete denuclearization. During this period, and despite the absence of any nuclear tests or missile launches, there has been no progress on denuclearization, in return for security assurances and other deliverables. In fact, the appointed senior working-level negotiators, North Korea’s Vice Foreign Minister Choe Son-hui, and U.S. Special Representative Steve Biegun, apparently haven’t met during this period to craft a viable roadmap for verifiable denuclearization in return for security assurances, economic development assistance and a path to normal bilateral relations.​

Hopefully, in 2019 there will be progress in our negotiations with North Korea. After a planned second summit in early 2019 between Chairman Kim Jung Un and President Donald Trump, the lead negotiators will routinely meet to establish a roadmap that will culminate with the complete and verifiable denuclearization of North Korea in return for security assurances and economic development assistance. This process could entail the initial establishment of liaison offices in the respective capitals and a U.S. declaration to end the Korean War. North Korea could then provide a declaration listing all of its nuclear weapons and facilities and agree to a verification protocol permitting International Atomic Energy Agency monitors to visit non-declared suspect nuclear sites. With this in hand, it’s likely the United States would then entertain the lifting of selected sanctions. This would be progress.