KF-X: South Korea Wants to Build Its Very Own Fighter Jet (And It's No F-35) 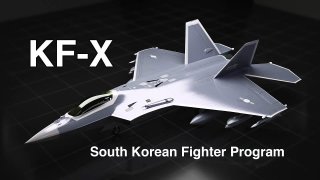 In an ambitious bid to join the exclusive ranks of nations to field a next-generation combat aircraft, South Korea’s defense industry is forging ahead with plans to develop its first indigenously-produced fighter.

The KF-X was revealed in 2010 as a joint venture between South Korea (ROK) and Indonesia; ROK was both the primary stakeholder at 80% of the investment share, as well as solely responsible for developing and producing the multirole fighter. Early details were sparse, with some industry insiders speculating that ROK was looking to produce a cost-efficient F-35 adaptation. Later reports gave the more plausible assessment that ROK is seeking a modernized F-16C/D variant to phase out the Republic of Korea Air Force’s (ROKAF) aging fleet of F-4 Phantom II and F-16 fighters.

More concrete information has emerged with the surprise reveal of a full-sized KF-X mockup at Seoul ADEX 2019, followed by a promotional video from South Korea’s Agency for Defense Development. The video goes far in dispelling the mystique that has surrounded South Korea’s homegrown fighter project in the past decade. Contrary to much of the defense reporting of prior years, the KF-X is not a “fifth-generation fighter”--  which itself is an unhelpfully broad label, as I’ve previously argued. Instead, the KF-X is being branded as a 4.5th generation fighter; a single-seat, twin-engine aircraft that is best seen as an advanced iteration of the F-16 concept with some stealth features thrown into the mix. The fighter will boast General Electric F414 engines, locally built and integrated by South Korean contractor Hanwha Techwin. The KF-X will support a top maximum speed of up to 1.8 Mach or 2,200 kilometers per hour, along with a payload weight of 7,700 kilograms. The KF-X block 1 will come solely with an external armament loadout, but later revisions will feature an internal weapons bay designed to store the homegrown long-range air-to-surface missiles currently being developed by Korean defense firm LIG Nex1.

The mass production and integration of AESA radars is unquestionably an impressive feat in the context of South Korea’s fledgling military aircraft engineering industry, which lacks the massive military-industrial economies of scale attained by its U.S., Russian, and Chinese counterparts over the course of many decades. Even for the world’s leading military powers, researching, developing, and mass-producing advanced combat aircraft is a notoriously complex and costly process that never quite goes according to plan. ROK sought to offset the prodigious costs of the KF-X project with a 20% investment share from Indonesia, though Jakarta’s commitment to the KF-X project has since fallen into doubt; Indonesia is reportedly seeking to renegotiate its part of the investment burden.

With mass production expected to begin in the mid 2020s and as many as 120 fighters to be delivered by 2032, ROK is betting big on the success-- both technical and financial-- of the KF-X program. The KF-X represents a much more ambitious goal for Seoul than merely updating its aging F-16 fleet. In opting to domestically produce a fighter that they could almost certainly import for less, South Korea’s defense industry anticipates that the KF-X program will mark the beginning of a profitable fighter business to propel them as a leading military hardware exporter in the Southeast Asia region.