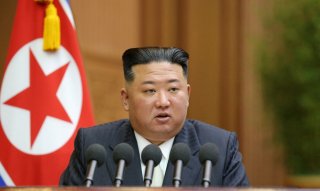 North Korea watchers have been abuzz in recent months about a mysterious female aide who has begun to appear with leader Kim Jong-un of late.

There has been speculation that the woman may be the North Korean leader’s “mysterious half-sister, Kim Sol Song,” although NK News now says that the woman is likely too young to be the older sister of Kim Jong-un.

“She has typically been seen carrying a handbag, possibly containing items the North Korean leader needs on call at all times such as his phone, cigarettes or medicine,” NK News reported earlier this year.

Now, NK News has more speculation: the mystery woman may be a former member of the Moranbong Band.

The woman may be Hong Yun Mi, a member of the all-female group that performed in 2018 at the Inter-Korean Summit, the South Korean broadcast outlet SBS said this week. The SBS report cited an anonymous government source, but an analysis by NK News found that the new aide and the drummer for that band look alike.

“Morandisco, a blog that closely tracks the Moranbong Band and other North Korean musical groups, said the woman first appeared in the role of lead drummer in late 2016 and that she stayed with the band for at least the next two years," NK News said.

Another Kim assistant, Hyon Song Col, was once the leader of the Moranbong Band.

Time wrote in 2018 about the band, which is described as “Kim Jong Un's favorite all-female pop group.” In fact, the band frequently performs songs that are about the glory of Kim himself. They are widely seen as a North Korean answer to the K-pop genre, which originated in South Korea but has since become massively popular around the world.

The group has songs called “Advance of Socialism” and “We Love the Party Flag,” Time reported.

“The all-female group, also known as the Moran Hill Orchestra, was founded by Kim Jong Un in 2012. The North Korean leader reportedly handpicked the members himself, as part of a ‘grandiose’ cultural modernization effort, according to Korean state media,” the Time report noted. “They’re known for their military uniform-style costumes, extravagant stage shows, and synthesizer-backed anthems that reveal a certain degree of Western cultural adoption in the pariah state.”

There were reportedly talks about the group performing at the Winter Olympics in Pyeongchang, South Korea, in 2018, but it doesn’t appear that the plan came to fruition.