Kim Jong-un and Donald Trump Are Clearly Not Friends 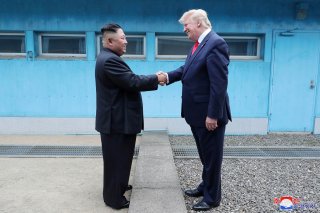 If you haven't read any of the letters between President Donald Trump and North Korean leader Kim Jong-un that Washington Post reporter Bob Woodward got a hold of, don’t fret. The media has certainly read them—and the overwhelming conclusion they have come to is that the two men are very fond of each other.

Pick your analogy: it’s as if Trump and Kim are soulmates, long-lost brothers, friends with a deep and everlasting bond. On the surface, the letters paint a picture of two men who are enchanted with one another and whose personal relationship is so strong that no secret is left between them. During one of his 18 sessions with Woodward, Trump bragged that Kim “tells me everything,” including how the North Korean dictator killed his uncle, Jang Song Thaek, beheaded him, and left the body on the steps to deter other senior officials from even thinking about stepping out of line. When the two aren’t calling one another “your excellency” or re-living fond memories of summits past, Trump and Kim are heaping excessive praise on each other’s negotiating acumen and marveling at how honest the two can be when there are disagreements. In his September 10 piece, Michael Hirsch of Foreign Policy writes that "the actual words exchanged between the U.S. president and North Korean dictator often sound more like Marc Antony falling hard for Cleopatra, and vice versa.”

Ever since that first summit in Singapore more than two years ago, the press has been infatuated with the Trump-Kim angle of the larger U.S.-North Korea story. Countless op-eds and television segments have been devoted to discussing the personal chemistry between these two individuals. For the U.S. media, it’s altogether strange, revolting, and exciting for a U.S. President to fly to a third-party destination and shake the hand of one of the world’s most ruthless despots.

While it’s true that successive U.S. administrations have dealt with ugly characters in the past and indeed have even established positive relationships with them (think Hosni Mubarak, Ferdinand Marcos, the right-wing military dictatorships in South America during the Cold War and all of the Saudi monarchs going back to the formation of the Saudi state in 1932), Donald Trump is the only U.S. President in history who has taken such a visible liking to start sparks with authoritarians. With Kim Jong-un, the letters, compliments, and framed pictures of the two smiling lead some to ask whether Trump actually has a genuine friendship with the head of the North Korean dynasty. The publication of Woodward’s latest book, complete with over two dozen letters exchanged between Trump and Kim, will take this already popular topic to steroid-like levels.

Of course, nobody outside of Trump or Kim’s inner circle will know whether a real, lasting friendship has been formed. But the likely answer will come as a disappointment to those in the media (particularly on television) who like to take every word that comes out of Trump’s mouth and scrutinize it for a larger meaning.

No, there is no genuine friendship.

No doubt, the correspondence Woodward unearths during the course of his reporting show two leaders who appear to like each other on a personal level. The letters are full of rosy terminology, but they don’t tell us much about the other’s actual state of mind. The analysts at the Central Intelligence Agency may be reading and re-reading Kim’s “Dear Trump” letters for clues as to the dictator's own state of mind, but it would be a major stretch to say that the agency will be updating Kim Jong-un’s psychological profile based on these notes alone. The same is true for North Korea's General Reconnaissance Bureau, which probably looks at Trump and sees a narcissist who can be easily wooed with excessive flattery.

In short: there is a big difference between using positive words of adulation as a tactic to soften somebody up and actually experiencing true affection for a person. We may never know the extent of the Trump-Kim “bromance” or even if there ever was one. But it’s reasonable to conclude that all of the garden-strolling, picture-taking, and “I love you, man” backslapping is part of the larger diplomatic dance that is U.S.-North Korea relations in the era of Trump.

When it comes down to it, Trump is friends with Kim Jong-un like a small business owner is friends with one of her wealthiest clients. The merchant is rolling out the red carpet and complimenting the client’s taste because she wants to make a big sale. Donald Trump is a salesman if there ever was one, and he craves a history-making deal from the North Koreans. If it takes a fake personal connection to the client (Kim) and over-the-top compliments about his intelligence in order to close the deal, so be it.