Kim Jong-un May Use Missiles to Mask Economic Insecurity 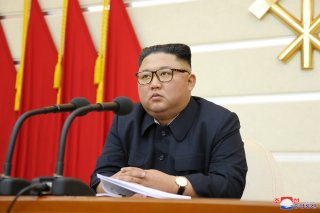 Despite all the silly nicknames of Kim Jong-un like “rocket man,” Kim has shown to the international society that he is a rational actor throughout the previous negotiations with the United States, including the 2018 Singapore Summit and the Hanoi Summit in 2019.

His uncompromising goal is to guarantee the survival of his regime. For that reason, President Donald Trump’s request for his commitment to abandon nuclear missiles entirely, without any credible promises for his survival, led to the current gridlock of the negotiation between the two parties. Kim may have explicitly learned the unbridgeable gap between the two countries. Unless the Trump administration suddenly changes the current approach and accepts an option of the gradual nuclear disarmament, there won't be a peaceful meeting between the two leaders this year.

The hostile reaction of the DPRK toward the United States regarding the coronavirus crisis shows the frozen relationship between the two countries obviously, and this situation will not be changed soon. Several intelligence sources reported that the coronavirus crisis accelerates severe economic crises in North Korea. For instance, the price of daily necessities is skyrocketing, even in Pyongyang. Given the lasting economic hardship imposed by the UN sanctions and the new challenges caused by the coronavirus, Kim Jong-un must be under tremendous pressure on making a breakthrough. Nevertheless, North Korea has refused to accept humanitarian aids from U.S. institutions. The message seems to be clear to Washington: “we are not going to hold your hand anytime soon.” Instead of using the card of cooperating with Trump or Moon in South Korea, Kim recently tries to strengthen his old ties with China and Russia.

One of the severe risks in this situation relies on a potential legitimacy crisis of Kim Jong-un inside the DPRK. The previous pattern of North Korea’s nuclear missile launches has shown the following two significant motivations behind. One is the use of nuclear weapons as a tactic of ‘entry brinkmanship’ for making a negotiation opportunity; another one is to strengthen military-first nationalism supporting the legitimacy of the regime domestically. If the current economic problems, leading to growing complaints among citizens, become a serious threat to Kim’s domestic authority, then he will seriously consider testing nuclear missiles (particularly launching SLBMs tested at Sinpo early May) to stabilize his power regardless of the U.S. election process. In that case, his purpose would be not threatening the United States but stimulating the nationalistic ideology of North Korean citizens and internal bureaucrats. It can also bring an effect of sending a signal abroad that ‘his’ country is stable despite this coronavirus crisis and all the rumors about his health, possibly leading to the collapse of DPRK.

Kim resurfaced first in public at a fertilizer plant in Sunchon after his long disappearance for weeks and emphasized “strong economic self-reliance. Similarly, North Korea’s state newspaper, Rodong Sinmun, has continuously highlighted the significance of self-reliance against hostile forces, indicating the United States. For a while, Kim Jong-un is expected to focus on strengthening internal solidarity in this pandemic crisis. If he fails to stabilize the devastating economic system and domestic politics by using ordinary measures, then Kim’s reasonable next step can be testing an ICMB or SLBMs later this year.

Park Hyeyoon is a Ph.D. candidate in political science at Colorado State University, focusing on global environmental governance with specific attention to norm development caused by international power politics and the global North and South problems.