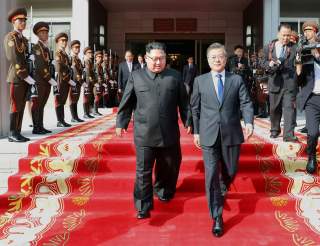 The Trump-Kim summit on June 12, 2018 in Singapore was a good start, if not sufficient, since it confirmed that Kim Jong-un was ready to negotiate over denuclearization. North Korea’s behavior after the summit, however, shows that it has been dragging its feet with the strategic goal that it will be recognized as a virtual nuclear weapon state. North Korea might believe that this goal will be realized when it delinks President Trump—who will be tempted to use the North Korean card for his reelection or camouflaging his Russian scandal—from the foreign policy establishment in Washington, who remain skeptical about North Korea.

In this vein, Kim Jong-un’s game plan for 2019 can be laid out as follows: North Korea (1) will continue a “tactical” dialogue with the United States until economic sanctions are lifted; (2) accelerate the miniaturization of nuclear warheads and the development of ICBMs (inter-continental ballistic missiles) capable of hitting the mainland of the United States until it will trade ICBMs for North Korea-U.S. diplomatic normalization and more; (3) will prevent the United States from imposing the verifiable declaration of nuclear programs on North Korea by taking self-initiated measures of denuclearization like the dismantlement of the Dongchang-ri missile engine test site and “obsolete” Yongbyon nuclear facilities; (4) will cooperate with South Korea to make it play as a shield against possible U.S. military attacks; and (5) will have President Trump withdraw or significantly reduce U.S. forces in Korea in return for North Korea’s apparently complete but partial denuclearization.

In this vein, North Korea is likely to rely on salami slicing tactics—separating the bilateral agenda into smaller pieces and maximizing its benefits for each concession—unless the United States draws genuine support from South Korea and China. North Korea will keep demanding the lifting (or easing) of economic sanctions that reciprocate North Korea’s previous “superficial” actions related to denuclearization. Then, North Korea could propose the dismantlement of ICBMs if it sees Trump getting impatient, thereby driving a wedge between the United States on the one hand and South Korea and Japan, on the other, who are more concerned about short-to-mid-range missiles than ICBMs.

If North Korea fails to accept the second U.S.-North Korea summit or high-level talks by late February, however, while continuing its nuclear activities, it will be seen by America as unwilling to agree on the roadmap for denuclearization. At that moment, President Trump will be facing two options. One is to return to the square one, which means the revival of “fire and fury.” The other one is that America will accept North Korea’s self-initiated denuclearization process without an agreed roadmap, which means President Trump is likely to ease economic sanctions to facilitate Chairman Kim’s dismantlement of the Yongbyon nuclear facilities and/or ICBMs. The latter option could be more likely when President Trump is put into the corner by court filings and investigation results by special counsel Robert Mueller and other prosecutors. But if North Korea goes too far in demanding the lifting, not just easing, of sanctions without making real progress of denuclearization, the United States will likely choose the first option.

Sung-han Kim is a professor at Korea University and former Vice Minister of Foreign Affairs, Republic of Korea.