Korea’s Endless State of War: How Does It End? 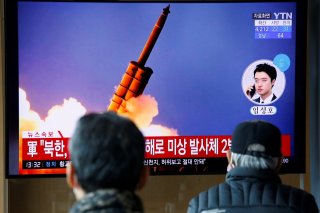 We have just marked the 70th anniversary of the onset of the Korean War, and the belligerents have yet to replace the 1953 Armistice with a formal peace treaty. Given the current tensions between the United States and the Democratic People’s Republic of Korea (DPRK), we’re likely to mark the 75th anniversary of an ongoing state of war in 2025—and possibly the subsequent 80th and 85th anniversaries will continue to see the war in that same state. Washington’s policy toward North Korea is a monument to U.S. foreign policy rigidity and failure.

For a brief period following the June 2018 summit meeting between President Trump and DPRK leader Kim Jong-un in Singapore, it appeared that a budding rapprochement was taking place and that it would soon produce a peace treaty. But that process stagnated over the next two years, and it has now turned to ashes. Kim’s government recently stated that the bilateral dialogue had failed to produce meaningful results and that Pyongyang no longer had an interest in conducting further negotiations with the Trump administration. Instead, the DPRK apparently will focus on expanding its small nuclear arsenal. Even more worrisome than the collapse of U.S.-DPRK negotiations is the breakdown of relations between Pyongyang and Seoul. The outreach that South Korean President Moon Jae-in initiated three years ago is on the verge of collapse. Indeed, Pyongyang severed all communications lines with the South.

Both actions may be simply Kim’s clumsy attempt to put all matters on hold until after the November U.S. presidential election. Until that event takes place, he has no way of knowing who will occupy the White House come January 2021. Kim could be facing four more years of dealing with Donald Trump, or he could have to consider negotiating options with a new interlocutor in Joe Biden. However, if Kim believes that a Biden administration might be more accommodating and flexible toward Pyongyang, he likely is making a miscalculation. Not only have Biden’s views on North Korea been thoroughly conventional over the decades, but many leading congressional Democrats have been shrill opponents even of Trump’s modest attempts to reach out to Pyongyang. U.S. policy toward North Korea might turn more hawkish, not less, during a Biden presidency.

Whoever is President for the next four years, there will be little progress toward ending the state of war and developing a normal relationship with Pyongyang. There is a bipartisan consensus in Washington supporting the longstanding U.S. demand that the DPRK commit to a complete, verifiable, and irreversible end to its nuclear weapons program. It is highly improbable that North Korean leaders will ever agree to take that step. They have seen how the United States has treated nonnuclear adversaries such as Serbia, Iraq, and Libya. Despite Trump’s rhetoric that Washington is no longer in the regime-change, nation-building business, the administration’s actions toward Syria, Yemen, and Venezuela suggest that forcible regime change remains a favorite U.S. strategy. Kim and his associates see a nuclear arsenal as the one reliable deterrent against such U.S. ambitions regarding the DPRK.

Unless U.S. leaders relinquish their quixotic quest for a nonnuclear North Korea and settle on more achievable objectives—such as limits on the size of a DPRK nuclear arsenal and on the number and range of ballistic missiles—there is almost no hope to overcome the ongoing impasse in negotiations. If that obstacle can be cleared away though, prospects become much better for resolving other important issues. The outcome could and should include the establishment of formal diplomatic relations between Washington and Pyongyang and the signing of a peace treaty bringing the Korean War officially to an end. Without a fundamental change in Washington’s objectives, however, the U.S.-DPRK cold war will continue, and a hot war remains a serious danger. Under these circumstances, we will be condemned five years from now to mark the 75th anniversary of the continuing Korean War.

Ted Galen Carpenter, a senior fellow in security studies at the Cato Institute and a contributing editor at the National Interest, is the author of 12 books and more than 850 articles on International affairs.