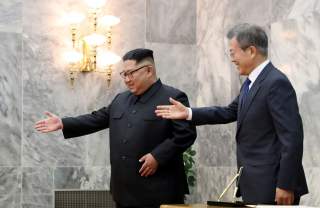 If we force ourselves to look clinically at the history of North Korea’s march into the club of nuclear weapon states, we face two unpleasant but inescapable facts.

First: the “North Korean nuclear crisis” is a drama set, and to a remarkable degree actually directed, by Pyongyang. North Korea determines when the “crisis” will seemingly bring the peninsula to the brink of war, and when tensions will subside. Likewise, North Korea lays down the terms for the conferencing and diplomacy in this “crisis.” It is North Korea, and always North Korea, that decides when there will be meetings, who will be invited, what will be discussed, and when the talking will cease.

The second fact, which follows directly from the first, is that North Korean leadership clearly has a strategy in this international confrontation—while the Great Powers just as clearly do not. This is an amazing contrast (and writing as an American: a maddening one), all the more so since we are well into the third decade of this “crisis.” But this fact explains why the United States and her allies are so consistently surprised, wrong-footed, and reactive in this ongoing confrontation with a tiny state commanding an even tinier economy.

Kim Jong Un spelled out the North’s game plan with admirable clarity in his New Year Day 2018 address, declaring that he was satisfied with the success of ballistic and nuclear tests, and was now moving into mass production of these nukes and missiles.​​

It was the successful completion (in Kim’s estimate) of the R&D effort that opened the “space” for the past year’s diplomatic overtures to South Korea and more importantly, to the United States. Self-deluding “Sunshiners” in Seoul and Trumpers in America want to take the halt in testing as a sign of North Korean goodwill—without recognizing that Pyongyang is at the same time quietly pressing ahead with armaments production that will permit it to take the “crisis” to a whole new level.

As 2019 commences, the “North Korean nuclear crisis” is in a sort of Sitzkrieg phase: a period of seeming calm that is doomed not to last. If past is prologue, how the “crisis” unfolds over the coming year will be mainly a result of decisions by North Korean leadership. Stay tuned for Kim Jong Un’s upcoming New Year Day Address.

Nicholas Eberstadt is the Henry Wendt Chair in Political Economy at the American Enterprise Institute.