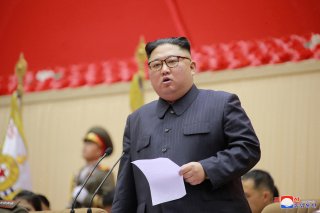 North Korean Supreme Leader Kim Jong-un convened the “Fourth Plenary Meeting of the Eighth Central Committee of the Workers’ Party of Korea,” a North Korean party conference at which major policy announcements are usually made, on Monday, according to the North Korean state-run Korean Central News Agency (KCNA).

The annual conference is typically attended by most high-level North Korean party and government officials. The KCNA indicated that the purpose of the meeting was to “review the implementation of main Party and state policies for the year 2021” with the ultimate goal of “guiding the struggle of our Party and people to usher in a new period of the development of socialist construction.”

North Korea has undergone significant political and economic challenges in 2020 and 2021. To keep the coronavirus from overwhelming Pyongyang’s shaky healthcare system, North Korea has virtually closed its border with China. This action has sharply restricted necessary imports. These restrictions, compounded by natural disasters and the negative economic effects of international sanctions against North Korea’s nuclear program, have damaged North Korea’s economy, and these crises have brought speculation on what methods Kim will adopt to address these problems.

The 2021 conference is significant too. It marks the tenth anniversary of the succession to power of Kim after the death of his father, Kim Jong-il, in 2011.

Kim has historically made major announcements of policy shifts during the conference. In early 2018, he indicated that he would send a delegation to the Winter Olympics in Pyeongchang, South Korea. The following year, he announced that he would continue to pursue nuclear nonproliferation talks with U.S. President Donald Trump. This led to the summit between the two leaders in Hanoi, Vietnam.

One item likely on the agenda for the coming meeting will be the issue of nuclear negotiations, which North Korea has largely refused to take part in since the accession of Joe Biden to the presidency. Pyongyang has indicated that it is willing to resume negotiations. But it has insisted that the United States and South Korea cease “hostile policies” as a precondition. These policies include joint military exercises and economic sanctions, which Washington is extremely unlikely to call off without concrete commitments from Kim’s government.

Lee Jong-joo, a spokesman for South Korea’s Unification Ministry, which is primarily responsible for diplomacy with Pyongyang, said that Seoul hoped that Kim would “start the new year by opening the door for dialogue with the international community.”