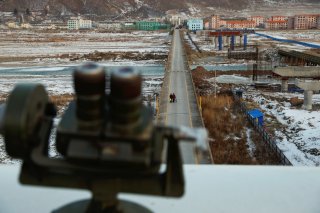 During the initial COVID-19 outbreak in Wuhan, North Korea became one of the first countries in the world to seal its borders to outsiders, fearing that the virus could overwhelm the country’s crumbling health care system.

Nearly two years later, the border remains sealed, but there have been signs that the self-imposed quarantine might be loosening. South Korea’s spy agency told Korean lawmakers last week that Pyongyang had reportedly engaged with China and Russia, discussing the resumption of trains across the border that it shares with the two nations. The agency also reported that North Korea had already accepted aid shipments from China during the pandemic.

Data from the General Administration of Chinese Customs, which is publicly available, indicated that in spite of the border closure, trade between Beijing and Pyongyang had increased to nearly $70 million in September, nearly double its volume of the previous month but still far below pre-pandemic levels.

North Korean officials have claimed that no virus cases have yet been recorded in the country, although there is no way this can be verified (and it has been the subject of considerable doubt). Earlier in the year, North Korea rejected a Chinese offer of three million doses of Beijing’s Sinovac vaccine, claiming that they should instead be sent to a country that needed them more.

In spite of North Korea’s alleged lack of coronavirus cases, the country has faced an increasingly challenging economic situation since the start of the pandemic. In spite of the country’s autarkic system, Pyongyang still relies on Chinese imports for goods it cannot produce itself, and Beijing has historically supplied it with agricultural goods and equipment. In addition to official employment, many North Koreans have depended on an illicit economy of black-market smuggling—an economy that has been decimated by the border closure.

The country has also faced poor weather conditions in 2020 and 2021, including a spring drought followed by midsummer floods, destroying much of its agricultural output. The UN Food and Agriculture Organization estimated in July that the country would fall short of its basic food consumption needs by nearly one million tons by the end of 2021.

Supreme Leader Kim Jong-un made a rare acknowledgment of the country’s problems last month, admitting in a speech that the country’s five-year economic plan had failed on account of COVID-19.