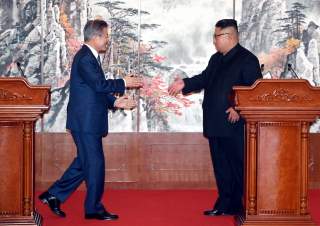 If the United States and North Korea are truly going to end what is decades of near conflict I have a radical idea: Let President Trump take the lead.

And no, I am not talking about building swanky apartments along the North Korean coast line but throwing away the same old tired North Korea playbook that has dominated Washington, D.C.’s foreign policy elites and past administrations.

It was only such actions that got us to the point we are at right now, resulting in the first of what seemed like improbable meeting between North Korea’s Kim Jong-un and Donald Trump. At the time, I panned the summit—I didn’t even think it would happen—as nothing more than a sham, reality tv and a massive concession to Pyongyang, doing nothing more than legitimizing a leader who deserves no such treatment.

But I was wrong. To be clear, while there was no historic agreement signed in Singapore, the images that came out of that summit—yes, follow me here for a moment—were the deliverable.

No longer were the U.S. and North Korea trading insults; Kim and Trump were in a room together, talking, getting to know one another and planting the seeds of what can only be described as trust.

That’s how history is made. In fact, it might be the images over the last few months that might lay the foundations for peace, avoid a nuclear conflict and ensure a Second Korean War is impossible. During the third Inter-Korean summit in September, President Moon rode through the streets of Pyongyang with Chairman Kim, waving to onlookers. And while some panned such spectacle as staged, you can’t deny the sincerity of Moon’s remarks to 150,000 North Korean’s in what is the world’s largest stadium. The “Moon Miracle” was on full display, and we were all able to witness what could be possible if all sides stopped being hostages to history and embrace the possible.

So, yes, I have moved over to the optimist camp when it comes to finding a way to craft a new beginning with North Korea. My belief is rooted in a clear-eyed realism that only tragedy can result if we were to return the same patterns of provocations, threats and counter threats. Look how close we came to nuclear war in 2017, do you really think we can avoid it if we go back to the days of “fire and fury”? Don’t bet on it.

My desired outcome for the summit is this: Donald Trump lights America’s old playbook on North Korea on fire in front of the entire world to witness. I hope Trump declares the Korean War over with a peace declaration signed by Chairman Kim that is simple, short and to the point. And with rumors that China’s president Xi Jinping could come to Vietnam, why not invite South Korea’s Moon and have them all sign what is obvious. From there, America should take Kim up on his over to close the Yongbyon nuclear facility for a package of sanctions relief.