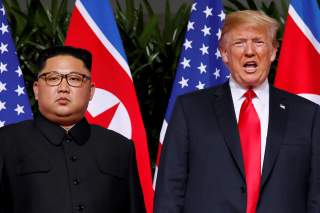 The Trump-Kim summit in Singapore on June 12, 2018, eased tensions and the risk of military confrontation on the Korean Peninsula. While it generated goodwill, the summit achieved little concrete progress. The second Trump-Kim summit in Vietnam on February 27 and 28 is an attempt to restart a stalled negotiation process to achieve denuclearization and establish a peace regime on the Korean Peninsula.

There is a prevailing assumption that Kim will not give up his nuclear weapons because he views them as critical to his regime’s survival. Only when he realizes that the nuclear program is detrimental to the future of his regime and that North Korea’s economy will better off without it will he change his mind. It will be impossible to achieve denuclearization if Kim is not convinced that his regime can survive after a peace treaty and receiving security guarantees for giving up its nuclear weapons and delivery systems.

The Vietnam summit presents a window for a diplomatic breakthrough, but this window will not be open indefinitely as Trump grows increasingly impatient to show his success as a deal maker.

In order to be a success, the Vietnam summit will have to produce an end result that shows that the North Koreans are committed to making a different set of choices from the past to tangibly advance denuclearization. While Kim affirmed his commitment to both denuclearization and economic modernization in his 2019 New Year’s Day speech, he has yet to convince the international community and U.S. decisionmakers as to why the North Korean leadership chose to focus on economic development and how he is going to achieve that goal.

U.S. special representative for North Korea, Stephen Biegun, said at Stanford University that it is essential to add “more” to North Korea’s commitment to dismantle and destroy the test sites for nuclear and missiles (Punggye-ri and Tongchang-ri) and plutonium and uranium enrichment facilities (Yongbyon). Additional commitments could include a verifiable halt to the production of ICBMs, the removal of ICBMs and warheads to a third country, and a halt to fissile material production at undisclosed sites or beginning to dismantle nuclear facilities other than Yongbyon

Likewise, the United States should show how to facilitate denuclearization through a combination of simultaneous diplomatic engagement and pressure at the second summit. While Biegun reaffirmed that the United States will not lift all sanctions on North Korea until denuclearization is complete, he left the door open to other unspecified actions. The corresponding measures that the United States could offer include a three-party declaration to formally end the Korean War, establishing a liaison office in Pyongyang, people-to-people cultural exchanges, and easing sanctions on humanitarian aid.

For now, denuclearization remains an open question, but there is reason to remain cautiously optimistic.

Miyeon Oh is a Director and Senior Fellow of the Asia Security Initiative in the Atlantic Council’s Scowcroft Center for Strategy and Security.