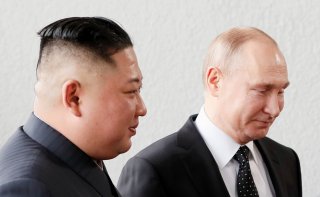 Since the days of Kim Jong-Il, North Korea has proudly espoused a doctrine of economic self-sufficiency. The DPRK’s state ideology, Juche, tells North Koreans that they are masters of their own destiny, subject to no external power. Experts have long grasped an altogether different truth: North Korea is deeply dependent on foreign aid and subsidies from neighboring states for its survival.

Much of the recent analysis has focused on the Kim Jong-Un regime’s ties with China, and rightly so-- Chinese foodstuffs and energy shipments are indispensable to keeping North Korea’s beleaguered economy afloat. But as important as it is, Chinese aid is only one piece of the larger, illicit trade network that the DPRK uses to circumvent the international sanctions arrayed against it. Over the past decade, the DPRK has cultivated a particularly fruitful economic relationship with Russia, its northern neighbor and former Cold War ally.

As a permanent member of the UN's Security Council, Moscow-- along with China--has signed off on virtually every major international sanctions package against North Korea over the past decade. The Kremlin continues to voice support for international efforts to facilitate nuclear disarmament on the Korean peninsula, but Russia’s mixed track record in enforcing recent sanctions resolutions paints a more ambiguous picture. The past three resolutions-- 2371, 2375, and 2397-- have included progressively stricter measures to block North Korean nationals from working abroad, as the regime expropriates all or most of their wages to sustain itself. Foreign labor is believed to have earned the North Korean government as much as 500 million dollars per year. Moscow continues to drag its heels on repatriating the 30,000 North Koreans who made their way up north in recent years to find work in Russia’s far east. Russia’s Foreign Ministry claims that all but 1,000 of these workers have already been deported, but experts believe that Moscow is exploiting a student visa loophole to admit thousands of fresh laborers every year.

Moscow also continues to act as one of North Korea’s largest energy suppliers, defying the various sanctions prohibiting energy exports to the DPRK. According to UN data, Russia ships at least thousands of tons of oil to North Korea every year. Precise estimates are difficult to come by, given the pains to which Pyongyang and Russian exporters have gone to establish sophisticated underground trade networks over the prior decade. Dozens of North Korean shell companies import oil through foreign proxies across the Asia-Pacific region, making the transactions difficult to trace; the US Treasury Department also notes the prevalence of illicit ship-to-ship transfers, conducted through vessels protected by several layers of forged documentation. Oil shipments marked for China are quietly diverted to the Russian border town of Khasan, and then smuggled into the neighboring North Korean district of Rajin through the Rajin-Khasan railway.

Russia also acts as a commercial intermediary between North Korea and other trading partners. According to western intelligence sources, North Korea has recurrently used the far-eastern Russian ports of Nakhodka and Kholmsk as hubs to ship coal to South Korea and Japan in violation of sanctions rules.

North Korea’s extensive economic ties with China are well-documented and frequently discussed, but there has been a tendency to underestimate just how severely the international sanctions regime is leaking from the north. If nothing else, the experience of the past decade demonstrates that active Russian participation and goodwill is crucial to any concerted international effort to induce changes in North Korean behavior.