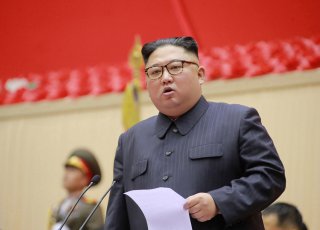 “Taiwan is an inseparable part of China and the issue of Taiwan pertains to the internal affairs of China… It is the due right of a sovereign state to take countermeasures against the moves of the outside forces openly interfering in its internal affairs and destroying its territorial integrity,” the regime said through the state-owned news agency KCNA.

“We vehemently denounce any external force’s interference in the issue of Taiwan and fully support the Chinese government’s just stand to resolutely defend the sovereignty of the country and territorial integrity...The U.S. scheme to disturb the growth and development of China and its efforts for accomplishing the cause of reunification is bound to go bankrupt.”

“The WPK Central Committee said in the letter that the public junket to Taiwan, made by an incumbent U.S. high-ranking official despite China's strong protest and solemn warning and the universal opposition of the international community, was a serious infringement on China's sovereignty and territorial integrity and an unpardonable political provocation aimed to defame the authority of the CPC and disturb the successful holding of its 20th Congress,” the KCNA said.

The WPK added that it “bitterly denounces the U.S. shameless provocation as a grave challenge to the socialist cause of China” and “ruthless interference in the internal affairs of a sovereign state.”

In comments this week, Pelosi expressed no regrets about her trip to Taiwan. “Yes, it was worth it,” Pelosi said in an interview on the Today show. “And what the Chinese are doing is what they usually do.”

She also noted that a similar trip by a group of senators earlier this year did not receive nearly as much attention. “It was bipartisan, it was high-powered, including the chairman of the Foreign Relations Committee—nobody said a word,” she said on the show. “If they can ignore a trip of five senators in a bipartisan way, why would they decide on my trip, that it would be different...There's something wrong with this picture.”

The biggest reason the trip got so much attention is that Pelosi is the Speaker of the House and second in line for the presidency. She was also the first Speaker to visit Taiwan since Newt Gingrich in 1997.