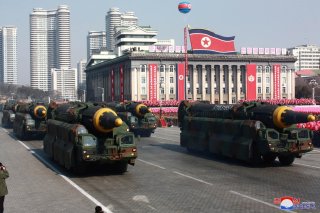 North Korea has been carrying out missile launches throughout the year, but on Wednesday, Pyongyang fired a massive amount of missiles in one day.

According to the New York Times, it was the largest number of missiles ever fired by the North Koreans in a single day. It was also the first time the North had fired so many missiles at the same time over the two Koreas’ maritime border.

“The siren started blaring at 8:55 a.m. and we got a message from our government computer system saying that this is ‘a real-life situation,’” Chung Young-hwan, a local official on the South Korean island of Ulleung, told the Times. “We took refuge at an underground shelter for three or four minutes before coming out again.”

The United States condemned the North’s launch on Wednesday.

"The United States condemns the DPRK's ballistic missile launches and its reckless decision to fire a missile below the de facto maritime boundary with the Republic of Korea," a State Department spokesperson told the Yonhap News Agency. “These launches are in violation of multiple United Nations Security Council Resolutions unanimously adopted by the council and threaten peace and stability in the region.”

"Our commitment to the defense of the Republic of Korea and Japan remains ironclad and we will continue to work closely with our allies and partners to limit the North's ability to advance its unlawful weapons programs and threaten regional stability," the spokesperson added.

"North Korea's missile launch, which marks the first time since the division of the peninsula that it has landed near our territorial waters south of the NLL, is very rare and intolerable,” the South Korean Joint Chiefs of Staff said in a statement.

Also this week, the United States announced that it “blacklisted” a man affiliated with ISIS who attempted to purchase weapons from North Korea.

“In 2016, senior ISIS leaders made various attempts to find sources of weapons and support. ISIS leaders directed Osama Abdelmongy Abdalla Bakr (Bakr) to make contact with the Democratic People’s Republic of Korea (DPRK). Bakr took direct instructions from an ISIS leader and was paid nearly $30,000 by ISIS leaders in support of his efforts,” the Treasury Department said on November 1.

“Bakr sought multiple meetings with DPRK embassy employees in Brazil in an effort to purchase lightweight weaponry and anti-drone technology for the benefit of ISIS. ISIS did not receive lightweight weapons, anti-drone technology, or anything else from the DPRK. Bakr remained in contact with ISIS leaders through at least 2018,” the Treasury Department’s statement continued.

The statement described the move as its “first designations against this affiliate of the Islamic State of Iraq and Syria (ISIS).”