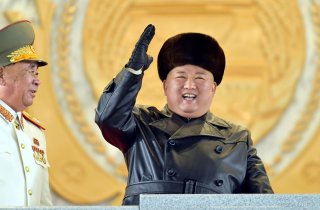 The North Korean regime has claimed since last year, rather implausibly, that the country has had no cases of the coronavirus. But soon, North Korea will receive some coronavirus vaccine.

According to a report Thursday by the Yonhap News Agency, which cited the vaccination organization COVAX Facility, COVAX will distribute 1.992 million doses of the AstraZeneca/Oxford vaccine in the first half of 2021. North Korea is believed to have a population of about 25.8 million.

After the Party Foundation Day last October, there were various reports out of North Korea that the design had spread in that country, which led to a delay in the start of school. There were also reports last fall that North Korea had executed a “rule-breaker” who brought goods across the Chinese border without authorization. The regime is also said to have issued an “emergency order” to enforce social distancing measures in workplaces.

The Centers for Disease Control and Prevention, though, does not buy that North Korea has really managed to remain coronavirus-free. The agency continues to assign North Korea a “Level 4,” which stands for a “Very High Level of COVID-19.”

Meanwhile, the Daily NK reported that North Korea had begun human trials for a coronavirus vaccine, based on the information that was collected from last year’s hack by North Korean entities that stole information from Western drug companies. The trials, per the report, are taking place at the Biological Industry Research Center of Kim Il Sung University. Daily NK also reported that a new entity called  Bureau 325, under the Reconnaissance General Bureau, is behind the vaccine project.

A Microsoft report in late 2020 said that multiple hacking personas, from both Russia and North Korea, were attempting to hack into companies developing vaccines and other treatments for the virus. The North Korean personas Zinc and Cerium were said to be behind the effort, including companies based in Canada, France, India, South Korea and the United States.

The AstraZeneca vaccine has not yet received approval in the United States, although early data on the vaccine is promising. A recent study of the vaccine has “suggested that a vaccine developed by AstraZeneca and Oxford University not only protected clinical trial participants from developing disease, but also may significantly reduce transmission of the virus that causes the disease,” per Statnews.

The vaccine was developed in record time, although the distribution of the vaccine has caused tension within the European Union over how exactly it will be handed out.

, a technology writer for the National Interest, is a journalist, essayist and film critic, who is also a contributor to Philly Voice, Philadelphia Weekly, the Jewish Telegraphic Agency, Living Life Fearless, Backstage magazine, Broad Street Review and Splice Today. The co-founder of the Philadelphia Film Critics Circle, Stephen lives in suburban Philadelphia with his wife and two sons. Follow him on Twitter at @StephenSilver.