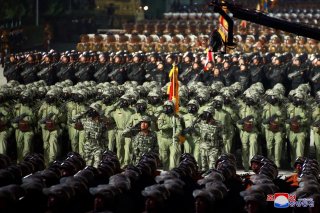 While the universe’s eyes were glued to the political polarization in Washington, DC and the second impeachment vote against President Donald Trump, the Trump administration dropped a significant foreign policy document into the public domain. Approximately one week before the administration dissolves, the White House declassified the 2018 U.S. Strategy Framework for the Indo-Pacific region—a ten-page document that served as the intellectual spine to the Trump administration’s overall policy in Asia.

Scroll through the framework and the dire conclusions of the Indo-Pacific strategy become clear: China is a near-peer competitor to the United States, is seeking to undermine and overtake U.S. power in Asia, and aims to dominate its smaller neighbors through intimidation and economic coercion. Authored in part by deputy national security adviser Matt Pottinger (Pottinger resigned in protest of Trump’s involvement in the Capitol Hill insurrection), the strategy unsurprisingly dons a China-centric focus and is intended to shock the U.S. bureaucracy into formalizing a whole-of-government, anti-China balancing strategy.

Yet there is one small snippet on North Korea that deserves consideration, for it demonstrates just how different the official Trump administration policy on Pyongyang was compared to the personal overtures Trump chose to take with North Korean leader Kim Jong-un. The small North Korea blurb in the strategy framework also highlights a disturbing reality—the U.S. foreign policy bureaucracy is wholly out-of-touch on the North Korea issue and is unable to keep with the facts on the ground.

As much as Trump has sought to distinguish himself from the policies of the Obama administration, the National Security Council’s strategy document was nearly identical to the strategic patience policy of yesteryear. The document goes on to state a wildly expansive policy objective that has eluded multiple U.S. administrations for decades: Under “Desired End States,” the authors describe a fairytale-like scenario: “North Korea no longer poses a threat to the U.S. homeland or our allies; the Korean Peninsula is free of nuclear, chemical, cyber, and biological weapons.” In other words: the widely-touted goal of denuclearization that U.S. national security officials repeat ad-nauseam is only one part of the puzzle. What the Trump administration is really interested in is North Korea’s total demilitarization, an ask no self-respecting, sovereign state would waste time contemplating.

According to the memo, the NSC evidently believes this far-fetched, other-worldly end-state is within their capacity. All the administration needs to do, its authors contend, is dial up the military, diplomatic, and economic pressure until the Kim regime has no plausible alternative than to sue for negotiations on Washington’s terms. The framework lists a number of “actions” the administration could take to convince Kim Jong-un to “relinquish” his nuclear weapons. All of them harken back to the second term of the Obama era, when sanctions, diplomatic isolation, and the patient act of waiting characterized the policy. Among the actions listed was “maximize pressure on Pyongyang using economic, diplomatic, military, law enforcement, intelligence, and information tools to cripple North Korea’s weapons of mass destruction programs, choke off currency flows, weaken the regime, and set conditions for negotiations.” Only if the North Korean regime exhibits a willingness to move away from its nuclear and missile programs are negotiations viewed as appropriate.

It’s highly unlikely Trump read this strategy framework. But this wouldn’t be the worst thing in the world, for the objectives and actions listed in the memo are akin to “I want a pony” diplomacy, where the United States believes it can utilize the awesome powers at its disposal to extract unreserved capitulation from its adversaries. It’s a strategy that, quite frankly, failed abysmally in the past and is destined to fail abysmally in the future. You can be forgiven if John Bolton, a man who has been wrong about North Korea every step of the way and whose staunch opposition to the Clinton-era Agreed Framework helped put Pyongyang back on the nuclear road, was the source of this drivel.

Let’s be fair: it’s not like Trump’s highly publicized (and politicized) summit diplomacy was an unquestioned success either. Kim Jong-un is no more prepared to trade away his nuclear arsenal today than he was when Trump was still a private citizen. To underscore the point, Kim concluded the Workers’ Party Congress this week by calling the establishment of the North’s nuclear weapons deterrent “the exploit of greatest significance in the history of the Korean nation.” He also reiterated his interest in researching and building other military and missile systems, including tactical nuclear-tipped missiles and solid-fueled intercontinental ballistic missiles. “We must further strengthen the nuclear war deterrent while doing our best to build up the most powerful military strength,” Kim told the thousands of delegates in assembly. This doesn’t sound like somebody who is interested in denuclearizing.

But look at the silver lining: at least the United States and North Korean officials were able to sit in the same room together and broach these issues diplomatically. If Trump had followed the guidelines of his own NSC staff, then he wouldn’t have made it to Singapore at all.