Why Does Anyone Listen to John Bolton on North Korea? 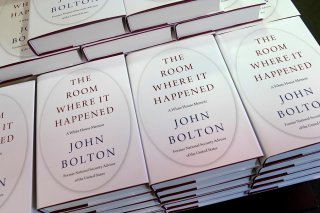 John Bolton, a veteran of four different U.S. administrations and ultra-hawk extraordinaire, thinks he’s the smartest guy in the room. He has a lot of opinions. He doesn’t hold his colleagues in high esteem, preferring to depict them as softies, weak-kneed capitulators, or wimpy appeasers. And he has a habit of thrashing his former boss the moment he waves goodbye and leaves government service. Before Donald Trump, whom Bolton accused of putting his personal political interests above the country’s, there was George W. Bush—a man who spent considerable political capital on Bolton’s ambassadorial appointment to the U.N. What did Bush receive for his efforts? Nothing but nasty comments about his administration's “total intellectual collapse.”

Since excerpts of Bolton’s latest memoir were leaked to the press, the former ambassador, State Department official, and national security adviser has spent weeks doing as many interviews as he can. The purpose, in addition to making himself look good in history’s eyes, is to tar and feather his former boss, Trump, as a buffoon who doesn’t have the slightest clue about U.S. foreign policy or the office in which he holds. In typical Boltonian fashion, the master bureaucratic infighter has focused much of his time on the Trump administration’s North Korea policy, waxing with unwrinkled self-confidence about why Trump’s summits with North Korean leader Kim Jong-un were foolish and why it’s beyond useless to even negotiate with the Kim dynasty. Why Bolton, the world’s best destroyer of arms control agreements and whose solution to the North Korean nuclear problem is to bomb Pyongyang into the stone age, thinks he’s qualified to comment on the subject is beyond comprehension. Naturally, that hasn’t stopped him from supplementing his poor record with recommendations.

If you haven’t had time to watch or read Bolton’s July 13 interview with South Korean publication Dong-A-Ilbo, don’t worry. It’s largely the same nonsense he has been spouting off for years.

On the Trump-Kim summits

Bolton unsurprisingly refers to Trump’s decision to meet face-to-face with Kim as a decision that should never have been made. He called it a “mistake,” a “fruitless” campaign in showmanship that did nothing but give the president some good airtime, Kim legitimacy, and the Kim dynasty the hope that Washington was close to recognizing North Korea as a nuclear weapons power.

In his book, Bolton describes South Korean President Moon Jae-in’s engagement strategy with Pyongyang as “schizophrenic.” What Bolton doesn’t provide is an alternative that is in any way more viable. If he opposed the summit meetings, what would he have done differently other than  hop on his soapbox and complain about the futility of it all? We don’t know because Bolton was never interested in diplomacy with North Korea to begin with. As Deputy Secretary of State Stephen Biegun said about his former colleague last week, Bolton is "locked in an old way of thinking, focused on only the negatives and what is impossible, rather than thinking creatively about what is possible.”

On the Libya model:

It wouldn’t be a John Bolton interview if he didn’t mention the Libya-model for the millionth time. For those unfamiliar with the Libya model, it's a shorthand phrase for “give me all of your nuclear weapons, surrender unconditionally, and maybe…just maybe…you will receive some economic and diplomatic rewards at a later date.” As illustrated through his long record in government, Bolton is a big fan of coercion. He believes that through strict sanctions, diplomatic isolation, or the threat of military force, the United States can essentially will its way into getting what it wants. And if the other party is bold enough to resist, then Washington may just have to consider ordering the the Air Force to load their aircraft with munitions.

The Libya model refers to the late Muammar al-Qaddafi’s decision to trade his weapons of mass destruction programs for economic sanctions relief and investment from the West. The only problem, of course, is that the North Koreans associate the Libya-model with regime change—as in, a few years after you surrender your WMDs, you may be captured by your enemies and strung up. Bolton knows this, of course, which is why he deliberately mentioned Libya in his public remarks about North Korea diplomacy and nearly succeeded in tanking the Trump administration’s outreach with Pyongyang before it had a chance to work its will. Trump stews about the episode to this day.

What does North Korea plan on doing with its nuclear weapons?

Nukes are the ultimate security guarantor for a nation, a way to deter a foreign adversary from invading or taking military action against its territory. But according to Bolton, North Korea isn’t using nuclear weapons for defensive purposes. "I think Kim Jong Un favors reunification of the Korean Peninsula on his terms. And if he has nuclear weapons that can threaten the United States. It strengthens that position he can say to the United States, 'you pull out of South Korea, or you're at risk of our nuclear weapons’.”

Well, no, not really. Bolton makes it sound like North Korea is run by a bunch of suicidal maniacs intent on dominating Northeast Asia. Granted, it’s easy for many Americans to make that assumption because Kim Jong-un has gone to extraordinary lengths to silence dissenters, real and perceived—even those who happen to be in his own family. But consolidating political power and striving to drive U.S. troops off the Korean Peninsula via nuclear blackmail are two completely different things. The first is an attempt to ensure Kim’s total stranglehold over the ruling system and to send potential challengers a message that an agonizing death will await you if you dare make a move. The latter is a scenario that could easily spiral out of control and result in the very thing Kim Jong-un wants to avoid even more than the coronavirus: his dynasty’s annihilation.

The only thing more frightening than a nuclear-armed North Korea is a senior U.S. national security official in a position of power who believes North Korea can’t be deterred.