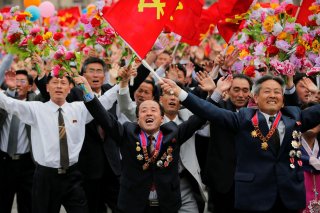 North Korea is the graveyard of predictions. Here’s one that even I hope will not stand the test of time: the Korean War will not come to an end by 2025, its 75th anniversary. Many esteemed commentators have predicted the fall of the Kim regime and the collapse of the state. Despite being labeled “failed,” “rogue,” “pariah,” and “brittle,” the North Korean state has endured famine, floods, climate change, destabilizing currency revaluation, and bellicose rhetoric. Barring a foreign intervention or the sudden emergence of a North Korean Katniss Everdeen, the Kim regime will likely mark that 75th anniversary still firmly ensconced in power, nuclear arms at the ready. Thus, the war will continue.

Why the regime endures is sometimes difficult to see and necessitates understanding the power of individual rational action to support self-perpetuating systems. The mafia-esque Kim regime—which holds a firm grip over the country’s three major power centers: the bureaucracy, the party, and the military—provides the elites in Pyongyang with a standard of living that is luxurious relative to everyone else in the country. Even if Kim Jong-un were to die, the elites would go along with whoever was next in line because that person affords them the best chance of maintaining a life that could get much worse if conditions were to change drastically. Rationally speaking, each of these individuals and families in the bureaucracy, the party, and the military see the Kim family structure as the most probable way to maximize on their collective utility function.

We should all be aware now of how a single person’s choices, despite being perfectly rational when considered individually, can uphold systems that are downright irrational when considered holistically. For example, one of the pillars of systemic racism termed “opportunity hoarding” is perfectly rational for those who engage in it. It is these smaller, daily choices made by individuals in North Korea with a modicum of power, be they mid-level military officers or state functionaries, to not take more drastic actions which reinforce the status quo. Brave defectors and those who’ve highlighted the abominable human rights abuses committed by the Kim family and the power structure that supports it are unfortunately the outliers. Even with the occasional shocks to the North Korean system from disease and poorly considered policies, the system has shown itself to be quite resilient.

Welton Chang is Chief Technology Officer at Human Rights First (HRF). Prior to joining HRF, he was a senior researcher at the Johns Hopkins Applied Physics Laboratory (APL), where he led teams and developed technical solutions to address disinformation and online propaganda. Before joining APL, he served for nearly a decade as an intelligence officer at the Defense Intelligence Agency (DIA) and in the U.S. Army, including two operational tours in Iraq and a tour in South Korea. The views expressed here are his own.