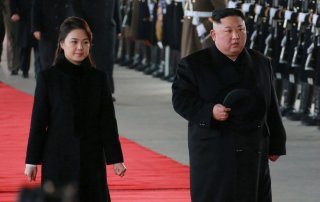 Ri Sol-ju, the wife of North Korean leader Kim Jong-un, spent nearly all of 2020 out of the public eye, which confounded North Korea observers.

Ri, a former singer who was described in a recent documentary as “the Kate Middleton of North Korea,” appeared at the Lunar New Year event last January, but then made no public appearances for the remainder of the year. Speculation stated that Ri had either been caring for Kim’s ill aunt, or was concentrating on her daughter’s education, or that she was pregnant, or perhaps was concerned about the spread of the coronavirus.

But this week, Ri made her long-awaited return. The first lady appeared along with her husband at a concert which took place at the Samjiyon Theater in Pyongyang, the Yonhap news service reported, citing the North Korean state media newspaper the Rodong Sinmun. The concert commemorated the birthday of Kim Jong-il, Kim’s father and predecessor.

Reuters published photographs, of the couple, who were smiling. They appeared with a large crowd in the theater, although no one in the photos was wearing a mask or practicing social-distancing. North Korea has claimed for most of the past year that it does not have a coronavirus problem, although the regime has put some draconian measures in place to prevent the spread of the virus.

To commemorate the holiday, Kim also visited the Kumsusan Palace of the Sun, in order to lay wreaths at the embalmed bodies of his father and grandfather.

The first lady did not appear at any of the major events held in North Korea last year, including last month’s 8th Congress of the Workers' Party of Korea and last fall’s massive military parade.

Ri is believed to be in her early thirties and was first introduced as Kim’s wife in 2012. Ri had a youthful career as a singer, although a report back in 2012 stated that some hardliners within the regime were “trying to erase her past as a singer and entertainer by confiscating popular bootleg CDs of her performances.”

The Kims are thought to have three children, although that has not been confirmed.

Ri had been known to disappear from state media for months at a time on several occasions previously, including a four-month period in 2017.

In fact, Kim Jong-un did not appear publicly for several months in early 2020, leading to widespread speculation that he was ill or even dead. But Kim soon resurfaced and has appeared at multiple public events in the last six months.