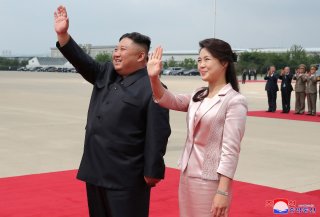 Ri Sol-ju, the wife of North Korean premier Kim Jong-un, has not appeared in public in several months, and some in that country are beginning to ask questions about why that is.

Not much is known about Ri, except that she is a former singer who was once part of the “Army of Beauties” cheerleading squad, per a Fox News profile earlier this year. She is thought to be around 30 years old, a native of Chongjin, and a graduate of Kim Il Sung University. It’s also not clear how many children the family has, although some reports say three.

Daily NK reported this week that Ri has not been seen in public since January, with her last reported public appearance taking place at a Lunar New Year event. She was not present at the recent military parade, held on October 10.

Per the piece in Daily NK, which uses one anonymous source only, rumors have been swirling as to where, exactly, North Korean’s first lady has been this year. One is that Ri has been caring for Kim Kyung Hee, the sister of the Kim Jong-il and the current president’s aunt, who is said to be in ill health. Jang Song Taek, the aunt’s husband, was killed in 2013, possibly by execution at Kim’s hand.

Another rumor is that Ri has been concentrating on educating her daughter, who is believed to be around seven years old. The third rumor is that Ri is ill herself. Her disappearance, per the report, is “likely due to the spread of COVID-19 given that her last public appearance occurred right before the pandemic went into full-swing.”

It’s not clear at all if any of these rumors are true, if more than one of them are true, or if Ri’s absence is explained by some other factor.

A report in June, by WION, stated that a series of anti-Kim leaflets appeared in North Korea this year, including what a Russian envoy described as “dirty, disgusting depictions” of North Korea’s first lady. The leaflets, which were reportedly transplanted by air balloons or in bottles, were blamed by the Russian envoy on South Korea.

Daily NK reported in August that Ri had appeared in a documentary produced for the military, “The Great Mother of Songun Korea,” alongside  Ko Young Hee, who is the mother of Kim Jong-un and the widow of the country’s previous leader, Kim Jong-il. This marked the first time the two women had appeared together in a film.

Kim Jong-un himself was widely reported to be in ill health in April, although he appears to now be healthy.