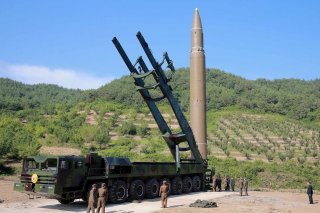 Days later, the North proceeded with its threat and cut off all inter-Korean phone lines to Seoul. When South Korean officials dialed up their counterparts across the DMZ, nobody picked up. Then, when the Moon government took action against the two North Korean defector groups by withdrawing their licenses and filing a criminal complaint, Human Rights Watch sharply condemned Seoul’s decision and called it "a blatant violation of freedom of association”—a sentiment shared widely by Korea watchers.

And now, as if Moon needed anything else on his plate this week, a South Korean newspaper reported that U.S. intelligence officials spotted as many as six ICBM’s atop transporter erector launchers at a missile base in South Pyeongan Province.

Normally, when a story about a North Korean ICBM hits the press, pundits and journalists covering the Koreas assume Kim Jong-un is either thinking about a launch or preparing for one. Last December comes to mind. Frustrated at being on the receiving end of what it viewed as old denuclearization proposals, North Korean officials talked about an ominous “Christmas gift” for the Trump administration if the U.S. position didn’t change. The general consensus at the time was that this so-called gift could be an ICBM, a poignant and bold demonstration of the regime’s displeasure. As we now know, no such gift was forthcoming. Christmas came and went, and no ICBM test was conducted.

As former senior State Department official and North Korea expert Bob Carlin frequently reminds us, many U.S. analysts tend to have preconceived notions the North as inherently duplicitous, averse to diplomacy and compromise, hardline to the core, and uninterested in being anything but provocative. The latest ICBM missile movements are likely to result in the predictable storm of hot takes about how a North Korean ICBM test is only a matter of time and how the days of “fire and fury”—a period when the White House was callously debating a "bloody-nose strike” on Pyongyang’s nuclear weapons program and military facilities—could make an ugly return by the fall.

Could Kim Jong-un be prepping for an ICBM launch?

The answer is yes, anything is possible. But it would also be the most extreme option the North Korean leader could take to send Washington a message. While one hopes that President Trump wouldn’t react to such a hypothetical test foolishly or emotionally, one can’t be entirely sure given the nature of this particular commander-in-chief. Kim cannot be fully confident how Trump would react, especially if he proceeds with a test at the same time Trump is in the middle of a live-or-death struggle for his political future. While there are a few voices of reason in this administration (Deputy Secretary of State Stephen Biegun, for instance), Trump is likely to perceive an ICBM test as the gravest insult to him personally, a purposeful punch to the gut, and the elimination of the only concrete accomplishment he could plausibly cite for his top-level diplomacy with Kim—a suspension of long-range missile tests.

All of which is to say that Kim will tread carefully. He may look funny, wear the same gray-suit every day and smoke like a chimney, but Kim isn’t going to recklessly authorizing a launch of such magnitude. He understands that to send a Hwasong-14 or Hwasong-15 into the sky would very likely put the kibosh on an already floundering U.S.-North Korea dialogue, which means any small notion of U.S. or U.N. Security Council sanctions relief is shut down. Kim also knows he isn’t going to get a better deal from a potential President Joe Biden, a man who supported a military strike against North Korea as a senator and who stated during the 2020 Democratic presidential primary that he wouldn’t even dream of meeting Kim unconditionally.

Is the latest report of ICBM movement a prelude to the first long-range missile test in over 3 years? We don’t know. Could it be? Yes, it could. But none of us should assume this scenario is a fait-accompli. For Kim to go forward would be like him opening the lid of a Pandora’s Box. It would also make the jobs of those in the U.S. counseling for a formal diplomatic relationship more challenging than it already is.