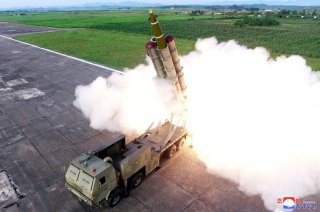 The KCNA showed images of testing on Saturday and Sunday, including photos of missiles being fired from a truck and traveling through the air. The state-controlled outlet reported that the missiles remained in the air above North Korean territory for 126 minutes before striking their targets. While North Korean Supreme Leader Kim Jong Un was not in attendance at the test, Pak Jong Chon, Kim’s military chief, was in attendance and praised the launch afterward.

The last pause in North Korean testing ended in March when Pyongyang fired two short-range ballistic missiles into the sea—seemingly as a test to probe the reaction of the newly inaugurated President Joe Biden.

The U.S. relationship with North Korea has experienced significant ups and downs over the past five years. Following an escalation of tensions in 2017, the administration of President Donald Trump openly courted Kim, with the two leaders sharing two high-profile summits in Singapore and Hanoi, as well as a third meeting at the demilitarized zone (DMZ) and a handful of personal letters between the two.

The Biden administration’s special representative for North Korea, Sung Kim, appears to have been more restrained in his approach than Trump, quietly advocating a return to nuclear talks and avoiding high-profile engagement. However, Pyongyang has so far refused dialogue, insisting that the United States should first remove sanctions on North Korea and end its military alliance with South Korea.

At the moment, though, there is mounting evidence that the U.S.-ROK alliance is the least of North Korea’s political problems. Recent floods, an officially-denied COVID-19 outbreak, and crippling economic sanctions have significantly hurt the country’s economy, prompting a rare admission of its challenges from Kim.