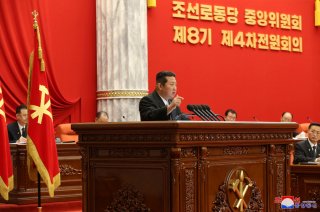 During the meeting, the parliament discussed the North Korean government’s budget, issues surrounding overseas residents, and a new law on the country’s childcare, according to the state-run Korean Central News Agency (KCNA). Supreme Leader Kim Jong-un, the country’s autocratic head of state, did not attend the meeting. In his absence, it was chaired by Choe Ryong Hae, the chairman of the parliament’s standing committee.

The SPA, which has nearly seven hundred members, is dominated by the Workers’ Party, the sole ruling party in North Korea. It typically meets once or twice per year over multi-day legislative sessions.

Although it has considerable de jure power under the North Korean constitution, the SPA rarely acts independently of Kim’s authority and has been described by many observers as a “rubber-stamp” parliament established to approve his decisions.

The promise of economic development is a major concern for North Korea, as the country has faced steadily escalating economic problems since the onset of the COVID-19 pandemic. International sanctions over North Korea’s weapons programs, the negative economic impact of COVID-19 lockdowns and other safety measures, and the sharp reduction in trade with China have devastated the nascent North Korean trade sector. At the same time, the country has been beset by natural disasters in recent years, complicating its ability to grow food for its autarkic economy.

Because of its precautions, Pyongyang has reported zero COVID-19 cases since the onset of the pandemic, although this number has been dismissed as unrealistic by most outside observers.

Kim Tok-hun, North Korea’s premier since mid-2020, claimed that the meeting was intended to make progress toward the goals of North Korea’s current five-year plan, which was launched in early 2021. He indicated that particular progress would be made in the metal and chemical industries, according to the KCNA.

Tok also claimed that external trade would increase in 2022, and the country’s agricultural sector would be strengthened. He promised to “increase the production of meat, eggs, and dairy goods and put efforts into the production of fruits, vegetables, mushrooms, and oil-bearing crops so as to greatly contribute to the people’s diet.”