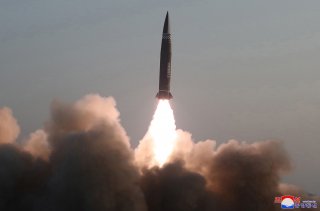 The test launch was met with speculation that the missiles in question could be a North Korean copy of Russia’s Iskander missile system. “I believe these were short-range ballistic missiles, which we call KN-23,” Japanese military expert and a senior researcher at the Research Center for Advanced Science and Technology at Tokyo University Yu Koizumi told Russian outlet TASS news. “This is the North Korean copy of the missile that is called Iskander in Russia. They can be identified, as it seems to me, by the typical low flight path.”

The KN-23 SRBM bears a striking resemblance to Russia’s Iskander-M missile system. However, if the weapon comports with photos from the launch, it appears that the missiles in question are not the original KN-23. Rather, they seem to be an improved KN-23 variant, first tested in the summer of 2019. That new missile is slightly longer and boasts a differently shaped warhead. The missile’s concrete specifications remain something of a mystery, as is often the case with North Korean military hardware. The Iskander-M system is incapable of operating at North Korea’s cited range of 600 kilometers, though this does not necessarily corroborate the Japanese-South Korean estimated range of 450 kilometers or less. The 600 kilometers figure, after all, is consistent with previous North Korean claims about the original Kn-23. Furthermore, the KN-23 series looks to be an upgraded derivative, rather than a pure copy, of the Iskander-M. North Korean sources added that the missile can perform maneuvers to evade missile defense systems, a capability that it shares with Iskander-M.

Particularly interesting is North Korea’s unconfirmed claim that the new missile has a 2,500-kilogram warhead, as compared Iskander-M’s warhead of 700 kilograms or less. As noted by 38 North, this is not necessarily an indication that the missile is designed to deliver a nuclear payload. Rather, the 2,500-kilogram warhead could be intended as a conventional weapon against large or fortified South Korean infrastructure. A 2,500-kilogram warhead would well exceed the weight of most North Korean warheads and is sufficiently powerful to serve the purpose of a dedicated bunker-buster weapon. Nevertheless, a missile that heavy will not radically enhance North Korean military capabilities; North Korea already has enough medium and short-range ballistic missiles to saturate large swathes of South Korea.

North Korea’s first missile test since President Joe Biden took office, the launch was likewise intended to flex North Korean strike capabilities against Seoul and Tokyo. Given the inverse relationship between payload weight and range, it is fairly unlikely that Pyongyang’s new missile has both a 2,500-kilogram warhead and a 600-kilogram maximum operating range. This would not be the first time that North Korea exaggerated the performance of its missiles, with the principal goal of pressuring its southern counterpart.