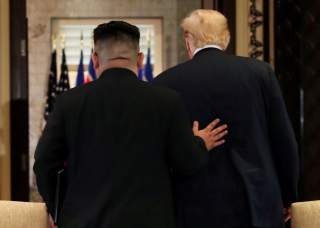 After a year of experimental diplomacy in 2018, the year ahead offers a narrow pathway for success.

Kim Jong Un’s 2017 push to demonstrate both a hydrogen bomb and intercontinental ballistic missile (ICBM) capability forced the United States to adopt a policy of maximum pressure followed by top-level diplomacy. Propelled by three summits, inter-Korean relations have achieved a foundation on which to build a new relationship. However, U.S.-North Korean denuclearization and peace talks are in a holding pattern. Even though Chairman Kim has suggested that denuclearization could happen by January 2021, Pyongyang and Washington have been unable to forge a workable roadmap for undoing decades of enmity and investment.

Although critics of the Trump administration like to mock the president for talking hyperbolically about the results of the Singapore summit (North Korea “is no longer a nuclear threat”) and his relationship with Kim (“we fell in love”), there is a need to move forward on two major fronts. First, redefining the U.S.-North Korean relationship in terms that can give Kim space to maneuver at home and trust his long-time adversary. Second, turning back the looming nuclear threat from Pyongyang. This yawning trust deficit must be addressed at the same time as negotiators seek progress on denuclearization.

Demands for an inventory of nuclear holdings became a prerequisite for the next step, but attempts to extract that from North Korea produced charges of “gangsterism.” Officials realize that the ultimate objective of final, fully verifiable denuclearization (FFVD) should not impede step-by-step progress, with as much being accomplished as possible in the next two years.

While the president is in no hurry to achieve denuclearization, he thinks more time could hinder than rather than facilitate FFVD. And while some have criticized the administration for asking for everything before Pyongyang receives anything, Washington is hinting at flexibility. For instance, an escrow account could be created to show Kim the money without giving him access to it until after substantive denuclearization steps.

President Trump will need the help of a divided Congress. Meanwhile, to receive any benefits from diplomacy, Kim will need meaningful denuclearization. North Korea needs to offer more than the verified closure of no-longer-central elements of its nuclear and missile program—namely, the Punggye-ri nuclear and Tongchang-ri ICBM test sites, as well as Yongbyon. At a second summit, Kim will offer to lock down a couple of major elements of its opaque nuclear-armed missile program.

Will a February summit in Mongolia or Vietnam be able to advance both a new U.S.-North Korean relationship and FFVD?

Without sacrificing the alliance or essential defense, diplomacy continues to be worth further investment. Rewards need to be apparent but mostly deferred, and maximum pressure must be preserved and turned up if talks sputter. But from increased truck traffic across the Sino-North Korean Friendship Bridge to reports of systematic deception with at-sea fuel transfers, North Korea’s system is set up to deceive. The question is not whether this will cease soon but whether the governments can make progress despite it.

The year 2018 provided some ice-breaking in the longstanding Cold War with North Korea. But achieving a durable overhaul in relations pose even bigger challenges for the year ahead.

Dr. Patrick M. Cronin is the Senior Director of the Asia-Pacific Security Program at the Center for a New American Security (CNAS).