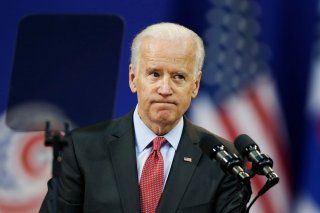 In spite of President Trump’s eagerness to engage with Kim Jong-un—"they fell in love,” remember—his approach to summit diplomacy has failed miserably to prevent North Korea from expanding its nuclear weapon and long-range missile capabilities. So, how will a Biden Administration deal with a nuclear-armed North Korea that remains a clear nuclear threat not only to South Korea and Japan but also to the United States itself?

Firstly, a Biden Administration must seal the breach between the United States and South Korea that has been negligently and willfully created by Donald Trump. Trump’s determination to take a wrecking ball to a vital security relationship, whilst pandering to Kim Jong-un, has weakened U.S. security in the western pacific. That has to stop, and the U.S.-South Korea relationship has to be rebuilt around mutual respect and interest and underpinned by enhanced defense cooperation and extended deterrence. The broader goal in doing this isn’t just about deterring North Korea, but also to strengthen regional defense cooperation across a free and open Indo-Pacific to counterbalance an aggressive and rising China.

Secondly, even given the failure of the Hanoi summit in 2019, Kim couldn’t have had a more pliable and accommodating negotiating partner than President Trump. Yet he must know that the good days are ending if Biden, whom Pyongyang’s news agency has called “a rabid dog,” wins the White House. Certainly, a Biden Administration will seek to use diplomacy to try and get North Korea to denuclearize, but no more leaderships summits without real progress towards denuclearization by Pyongyang first. Yet Biden’s national security team will know that North Korean denuclearization, even on the basis of a step-by-step approach in return for U.S. and South Korean concessions, won’t happen.

Thirdly, there is a real risk that Kim Jong-un would seek to test President Biden with a manufactured crisis, perhaps in the form of a new long-range ballistic missile test or, worse, a nuclear weapons test early in his administration. That could be a way of gauging Biden’s resolve or of forcing concessions through diplomacy, particularly an easing of sanctions. The best response by Biden would be a firm one which incorporates South Korea and Japan as a unified front to drive a message to Pyongyang, and Beijing, that the United States will not cede ground.

Fourthly, whilst Kim may manufacture a crisis, another risk emerges if a leadership struggle were to break out in the event of his demise, most likely through ill-health. The attempts by Kim Yo-Jong, Kim Jong-un’s sister, to engage in brinkmanship with South Korea earlier in 2020 haven’t come to much, with her brother keeping her on a tight leash, but it’s clear that she was seeking to establish her credentials for leadership. If a leadership crisis did emerge in which competing factions sought to claim the throne after Kim dies, the concern must be about the security and positive control of North Korea’s nuclear weapons, and the potential risks of internal unrest enveloping South Korea.

The stumbling point is, of course, the North’s nuclear weapons. They won’t give them up, and Biden shouldn’t make any up-front concessions for little in return. Absent a serious crisis, a President Biden may be content to deter and isolate North Korea, whilst placing the priority on repairing damage to the U.S.-South Korea relationship.

Malcolm Davis is a Senior Analyst in Defence Strategy and Capability at the Australian Strategic Policy Institute (ASPI).