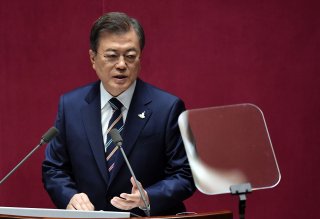 South Korean President Moon Jae-in has said that the number one priority for the new Assembly should be to get runaway housing prices under control.

Sky-high real estate prices have always been a problem in Korea, particularly in Seoul, with its extremely high population density. The increase in housing prices has not even slowed down during the coronavirus pandemic; the housing index in Korea has risen by almost 2% since January.

Elected to address inequities, including those that affect the young and women, Moon has struggled to implement policies that make a difference, and his approval rating has gradually declined. Now, he is down to 44%, the lowest since the Cho Kuk scandal. Even his support amongst women and Koreans in their thirties is declining.

In 2019, Moon implemented a cap on the price of units at newly constructed properties. He also proposed a set of policies in the legislature that included higher taxes on owners of luxury apartments and multiple apartments, but his Democratic Party was unable to pass it with their small coalition-based majority. Now that the Democrats have a supermajority, they should be able to enact Moon’s proposals.

Belatedly, Moon has admitted that the limited housing supply in Seoul, not just speculators, is a problem. But he has resisted calls to expand construction in the Greenbelt, which surrounds Seoul at a width of about 30 kilometers. Instead, he proposes building new apartment units in space already licensed for residential units but which are currently underutilized, like the Taereung Golf Course.

Under Moon’s administration, housing prices have continued to rise, with prices in posh Gangnam district rising by 24%, and prices in seven other districts of Seoul rising by 12% or more. The construction industry’s share of GDP was negative in four quarters. In October, housing prices in Seoul rose at their fastest clip in one year, and housing prices in Daegu rose for more than twenty-five straight weeks.

But Moon is far from the first president to preside over a period of rapid growth in housing prices. The increase in prices in Seoul hit 6% in 2012 and 3% in 2016. In 2007, a new administrative capital, Sejong city, was founded seventy miles south of Seoul, as an attempt to take housing pressure off the Seoul Metropolitan Area, where half of the country lives.

It did not help. Many of the government offices were moved to Sejong, but it was and is not an attractive place for people to live. While Seoul’s population has remained stable the past decade, Seoul’s neighboring suburbs continue to balloon. Suwon, for example, has added about 200,000 residents since 2010, and Incheon is on the cusp of hitting a population of three million.

As is often the case in Korea, Moon’s tax and regulatory plans for high-value properties have faced protests from those who might be impacted. A group gathered in the central Jongno district claimed such measures would violate their property rights and be unconstitutional. Critical hashtags about Moon have been among the country’s top trending topics this past week.

Members of the opposition United Future Party held a meeting in early July and criticized the “complete failure” of Moon’s housing policy. They proposed pro-market regulations and lifting restrictions on development in the Greenbelt.

Another concern of young apartment-seekers is the decline of the jeonse rental policy. (Jeonse roughly means “full-payment.”) A popular way of paying for an apartment has been to pay the landlord 50% or more of the value of the property upfront and then never pay rent for the length of the two-year term. The landlord would save or invest the money and make a profit on high interest rates and then return the original deposit. It was thought to be a good way for tenants to save their income. But interest rates have been on a long-term downward trajectory in Korea, making it less attractive for landlords to offer jeonse as an option.

Now realtors and renters are saying, “The supply of jeonse apartments is drying up.”

The Greenbelt was introduced in 1971, and similar greenbelts exist in Busan and a dozen other cities. Seoul’s was gradually increased in size, until it was at one point almost four times as large as its original size. After having been reformed in 1990, it has gradually been diminished in size, to the point now that it is 550 square meters, covering 12% of the Seoul Metropolitan Area and 25% of Seoul city itself. Seventy-six thousand people, or 0.3% of the metropolitan area’s population, live in Seoul’s Greenbelt. Plans to build apartment complexes on Greenbelt land frequently run into protests from environmental groups and existing homeowners who enjoy the scenery.

A 2004 paper by David N. Bengston and Youn Yeo-Chang has suggested that the Greenbelt brought costs and benefits to Seoul. It caused an increase in transportation costs for suburban commuters and may have raised housing prices (the extent of which is highly unclear). While protecting the land within the green space from development, it did push sprawl further out. However, “Seoul’s greenbelt has been remarkably successful at protecting important agricultural land, providing badly needed recreational resources in a megacity with few parks, protecting the beauty and natural heritage of the ancient capital of Korea, and maintaining vital ecosystem services.”

Jae Sik Jeon’s 2019 paper analyzing the results of relaxations of the Greenbelt in the 2000’s found no statistically significant decrease in urban housing prices and, in contrast, an increase in suburban housing prices correlated with more formerly natural land being developed.