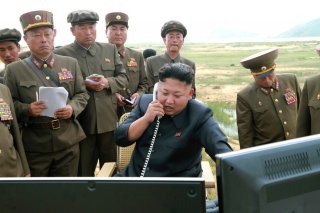 President Donald Trump appealed to North Korea’s Kim Jong-un by touting the sort of economic development, including hotels and condos, that the Supreme Leader could expect if he made a deal with the U.S. and abandoned his nuclear weapons. The president even included a video that played like a Hollywood-style movie trailer.

Although the sales effort fell short, the former real estate mogul was not the only person imagining profits to be made from developing some of Korea’s undeveloped land. Along with the 2018 summit, the market for border property exploded. Won-gi Jung of NKNews reported that “realtors were suddenly in high demand from people certain there would be a wave of redevelopment, construction projects and new infrastructure at the inter-Korean border.”

Realtor Jo Byung-ouk said: “People came from Seoul, and even from the United States.” Alas, that was then and this is now. Hopes for a demilitarized, perhaps even open, border have dissipated. Inter-Korean relations have steadily cooled rather than warmed, highlighted by the North’s destruction last year of the liaison office constructed by the South. Average property prices have dropped by a third from their summit-time peak. Jo is still hopeful of eventual reconciliation but, he admitted: “We just don’t know when that’s going to happen.”

Of course, more important than the prospect of real estate profits is what would make such development possible: peace. It is important to remember that this is the fundamental objective of U.S. policy, to prevent a recurrence of war.

The consequences of the Korean War were horrendous. America’s costs were heavy, especially coming so soon after World War II. At its peak, the war cost 4.2 percent of America’s GDP, about four times the cost of all the post-9/11 wars. Worse was the human cost—about 38,000 battlefield deaths for America. And that does not come close to the price paid by the Korean people. All told at least 2.5 million and as many as five million people, mostly Korean, are thought to have died in the conflict. More than half of them were civilians. Moreover, much of the peninsula was ravaged. Seoul was in ruins after changing hands four times. The U.S. Air Force left little to destroy in Pyongyang and elsewhere in North Korea.

Another round likely would be worse. Even without nuclear weapons, the Democratic People’s Republic of Korea could do enormous damage to the South and other nations in the region. For instance, the Republic of Korea has more than a score of nuclear power plants vulnerable to missile attack. Costs could be in the trillions and casualties in the millions. Unfortunately, the war would never just be “over there,” as Sen. Lindsey Graham bizarrely claimed. Indeed, if the Rand Corporation/Asan Institute estimate that the DPRK could have 200 weapons by the end of the decade comes true, and Pyongyang is able to target them on the U.S., the potential harm would be almost incalculable.

It is difficult to imagine what might be worth taking these sorts of risks. Not trying to transform Pyongyang. To disarm the North. To impose regime change. Or even to reunite the peninsula. The likely cost would be just too high, even if the immediate goal was attained.

Thus, Washington’s most important objective for more than 70 years has been to maintain the peace. Of course, that means with the Republic of Korea (ROK) free and independent. However, the latter is best achieved by preventing the gates of Hell from opening.

Necessary is an agenda different from that usually proposed in dealing with the North. Forget nuclear weapons for a moment. The top priority should be opening either liaison offices or embassies. The U.S. should have no illusion that increased conversation would turn the Democratic People's Republic of Korea (DPRK) into a liberal democracy. However, talking would help forestall future crises and defuse any which occurred. Regular contact also might help normalize diplomacy as a routine for the North Korean foreign ministry.

U.S. officials long have treated diplomatic relations as a reward. It is not. It is the best means of dealing with other governments, friend and foe alike.

Imagine the Cold War if Washington and Moscow did not talk with one another, had no official communication channel. Nor a permanent presence that facilitated unofficial contacts. The U.S. and Soviet Union had plenty of confrontations that could have gone very badly, most obviously the Cuban Missile Crisis. In the latter case, diplomacy prevented nuclear war.

Between 1949 and 1972 the U.S. and People’s Republic of China had neither official relations nor unofficial contacts. In 1950, as U.S. and South Korean forces chased the remnants of the North Korean military toward the Yalu River, Beijing attempted to warn America against overrunning the DPRK. That effort failed. An official diplomatic channel might have opened the way to a modus vivendi, an allied halt short of China’s border, followed by a ceasefire. Instead, the People's Republic of China's (PRC) entry into the fight extended the war to July 1953.

Moreover, whatever the status of nuclear weapons, America and ROK would benefit from a more normal relationship with the North. That is, one not dominated by a “hostile policy” by Washington or Pyongyang. Ties certainly need to improve if denuclearization is to have any chance of success.

Cynicism is understandable, a conviction that the North will neither agree to anything substantive nor fulfill any document signed. However, sanctions have proved fruitless in both preventing the DPRK from developing nukes and forcing it to abandon them. The North’s survival after isolating itself to protect against COVID-19 and the PRC’s willingness to aid the Kim regime suggest that even application of the tightest-possible sanctions demanded by critics would have little impact. As for preventive war, the risk of triggering another full-scale conflict at horrendous cost is too great. And simply threatening war gives North Korea more cause to develop an effective deterrent. Diplomacy is the only plausible alternative.

Moreover, Kim might be willing to make a disarmament if not a denuclearization deal. Skeptics tie him to his father’s and grandfather’s policies, and he certainly is no liberal. Rather, he has demonstrated his brutal capacity to consolidate power and dispatch potential rivals. However, he remains his own person, with very different experiences.

Notably, his commitment to economic development is strong and he appeared to enjoy playing diplomat with not only Donald Trump but the leaders of South Korea, China, and Russia. Warming up the bilateral relationship probably is necessary to get far enough to determine if Kim is willing to deal. Even if he chooses to retain his nuclear arsenal, better, less hostile ties would lower tensions and diminish the likelihood of confrontation.

Indeed, this perspective is reflected in the Singapore summit statement, in which the two governments promised an improved bilateral relationship and a peaceful regional system. The U.S. should end travel restrictions (Americans are barred from going there), Washington also should work with the United Nations to loosen restrictions on humanitarian assistance. To prepare for when the North ends pandemic restrictions, the State Department should do the same with unilateral regulations. The Biden administration also should invite ideas for other forms of both public and private cooperation and exchanges.

From there the administration would have a better foundation to address security issues. Pyongyang’s Hanoi offer remains a good starting point—significant nuclear reduction in return for meaningful sanctions relief, with the exact trade to be settled through negotiation. The latter should be conducted by a mix of senior officials and technical experts, with final approval by the president and supreme leader.

Whatever the outcome, the administration should remember its objective: create a permanent peace. People often insist that “failure is not an option” for the most trivial objectives. When it comes to maintaining a peaceful Korean peninsula, however, failure surely is not an option.