The Secret of Kim Jong-un’s Success 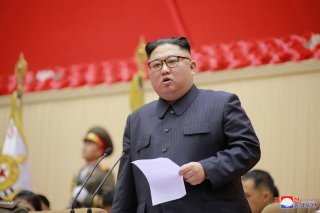 It may seem odd to laud the longevity of a thirty-seven-year-old dictator. But from concluding and then quickly reneging on a missile agreement in his first months in office, to ordering the brutal death of his regent uncle, to staring down former-President Donald Trump’s “fire and fury” pressure, Kim Jong-un is an improbable success story.

The secret to his success is forging a favorable balance of power inside and outside North Korea.

Kim began his rise to power ten years ago, on December 17, 2011, when his father, Kim Jong-il, died from a massive heart attack.  The North Korean regime was seized with shock and uncertainty. Could the young Kim Jong-un navigate his country’s second-ever political transition? Assuming he survived, how would the atavistic totalitarian state change?

Less than a month before his thirty-eighth birthday, Kim Jong-un is marking what he hopes will be the first of several decades at the helm of running the Democratic People’s Republic of Korea (DPRK). By carefully manipulating the strategic levers of power, Kim is not just surviving but, by all appearances, thriving.

The keys to his durability have centered on rejuvenating party power and discipline, co-opting elites, opening more markets, developing strategic arms, and balancing outside nation-states.

Politically, Kim upgraded the power of the Workers’ Party of Korea, ensured loyalty through purges and rewards, and suppressed and controlled the flow of public information.

Economically, at least before the pandemic, he has delivered benefits for elites. He has accomplished this feat despite stiff international sanctions through a combination of permitting more markets and more significant trade with China. Theft is also essential for his cash flow, which relies on a formidable and growing illicit cyber operation.

Militarily, Kim Jong-un has made remarkable strides towards developing a more lethal inventory of nuclear-capable long-range weapons. And he has kept the surrounding powers bidding for his affection or at least at bay.

The third Kim looked down on his father and set his sights, at least his leadership style, on his grandfather, DPRK founder Kim Il-sung. Kim Jong-un is far more ambitious than his father ever was. Indeed, Kim Jong-un’s goals are as grandiose as his grandfather’s but focused on building North Korea’s long-term power rather than near-term unification. Internationally, he covets a seat at the table of nuclear-weapon states.

Over the past ten years, Kim has notched some noticeable achievements. First and foremost, Kim and his regime have survived formidable odds at home and abroad. His progress in developing a suite of strategic weapons has astonished many worldwide. And, from summit meetings with the American president to restoring close ties with China, Kim has maintained his autonomy and a favorable regional balance of power.

But success has come at a price. Arguably Kim’s biggest failure is the inability to convert historic summits into a process that would have conferred greater legitimacy and prosperity on his regime. Instead of establishing a genuine détente with the United States and ending North Korea’s pariah status, Kim walked away from Hanoi in early 2019 without some agreed process in place.

Kim is too crafty a leader and too set on winning global attention to ignore the United States’ offer for serious dialogue over the long term. Because Kim needs to maintain a strategic equilibrium among regional powers, shifts in either South Korea or U.S.-China relations could trigger new provocations, diplomatic overtures, or both.

In March, the South Korean presidential election may force Kim to alter his standoffish behavior with the Biden administration because a more conservative leader in the Blue House will force Pyongyang to adjust to prevent a deteriorating external environment.

What is the long-term term outlook for Kim Jong-un? More likely than not, North Korea will be celebrating twenty years of ‘glorious’ leadership under Chairman Kim. But many scenarios are possible should a single man succumb to threats ranging from disease, accident, assassination, conflict, or coup.

Perhaps the biggest unknown remains the true impact of covid. With the Omnicron variant spreading globally, the coronavirus that has already stifled North Korean progress may yet undermine the regime in ways not yet visible to the outside world.

Dr. Patrick M. Cronin is Asia-Pacific Security Chair at the Hudson Institute. He is the author of Fear and Insecurity: Addressing North Korean Threat Perceptions.