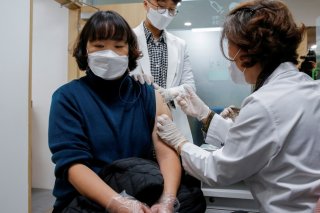 According to the Korea Herald, the government signed off on authorizing SKYCovione, a recombinant protein-based coronavirus vaccine developed by SK Bioscience, after the final examination committee held a meeting to review the vaccine’s safety and effectiveness.

“The approval [of SKYCovione] internationally confirms the abilities of our companies to develop COVID-19 vaccines,” she continued, adding that SK Bioscience is seeking an approval from the World Health Organization for its shots, which would potentially open export opportunities.

In clinical trials involving roughly 4,000 participants in South Korea and five other countries, the two-dose SKYCovione vaccine appeared to be more effective than AstraZeneca shots in building immunity against infections, officials at the Food and Drug Safety Ministry added.

With the official approval, SK Bioscience is expected to begin rolling out the vaccine in the second half of this year, as the local drug maker seeks to target markets abroad that have lower vaccination rates.

“SKYCovione has the proven safety verified as it was developed as a synthetic antigen vaccine. It also has the advantage of being able to be stored and distributed at room temperatures,” an SK Bioscience official told the Korea Herald.

“Based on this, we will supply the vaccine to developing countries with lagging vaccination rates through the COVAX Facility. We will also utilize SKYCovione’s platform to develop vaccines against other variants,” the official added.

South Korea—which reported 9,595 new COVID-19 infections on Thursday and more than eighteen million throughout the pandemic, per Yonhap News Agency—has eased most of its virus restrictions after battling a surge driven by Omicron earlier this year. Some experts, however, are contending that the country may see another rise in infections due to waning immunity and the possible emergence of even more contagious variants.

Meanwhile, the U.S. Food and Drug Administration (FDA) announced on Thursday that the next round of coronavirus booster shots should be modified to target the highly transmissible Omicron subvariants BA.4 and BA.5 in addition to the original strain of the virus.

“As we move into the fall and winter, it is critical that we have safe and effective vaccine boosters that can provide protection against circulating and emerging variants to prevent the most severe consequences of COVID-19,” Dr. Peter Marks, the FDA’s top vaccine regulator, said in a statement.