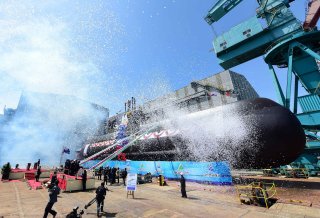 South Korea has launched a new homegrown submarine, the latest in Seoul’s multipronged effort to enhance its regional deterrence capabilities.

The launch ceremony for the ROKS Shin Chae-ho took place in a Hyundai Heavy Industries Co. shipyard in the southeastern city of Ulsan. The Shin Chae-ho is a diesel-electric attack submarine that boasts a variant of the Korean Vertical Launching System (KVLS) that supports the country’s Chonryong cruise missiles as well as its new Hyunmoo 4-4 submarine-launched ballistic missiles (SLBM). The South Korean military performed a successful Hyunmoo 4-4 ejection test last month, becoming the eighth country in the world to overcome the steep engineering hurdles associated with developing SLBMs, and the first non-nuclear country to acquire such a weapon.

"The [Shin Chae-ho] submarine has a strong capability of deterring provocations as it can be equipped with SLBMs test-fired earlier this month,” the South Korean Navy said in a press release. “Some 76 percent of its parts are locally produced, which allows for maintenance and other technological support in a timely manner.”

The Shin Chae-ho is the third and final boat of the Changbogo-III Batch-I submarines, conceived in 2007 as part of a $2.77 billion development project. The two previous submarines in the class, Dosan Ahn Changho and Ahn Mu, were laid down in 2018 and 2020, respectively. The submarine is named after the early 20th century Korean independence activist Shin Chae-ho.

“KSS Shin Chae-ho that inherited Shin’s spirit of independence movement with a pen will now play a major role in our national security, by effectively responding to omnidirectional security threats based on the strategic weapons system that possesses security deterrence ability,” said Vice Admiral Yong-kyu Jeon, according to Naval News.

The submarine displaces more than 3,500 tons submerged; it is 83.5 meters long and 9.6 meters wide. According to data provided by Republic of Korea (ROK) officials, the Shin Chae-ho carries fifty crew members and can remain submerged for twenty consecutive days. The Changbogo-III boats are the largest conventional submarines ever built by South Korea’s defense industry.

The Shin Chae-ho is projected to be delivered to the ROK Navy in 2024, following its completion of sea trials. The lead ship in the class, Dosan Ahn Chang-ho, was commissioned in August and is set to enter active duty service by August 2022. These models will be succeeded by Batch II, a sweeping upgrade and redesign package that will increase the submarines’ displacement to around 4,200 tons. Batch II is expected to include a total of ten vertical launch tubes, four more than on Batch I vessels. They will also feature a longer hull and an even greater proportion of domestically-sourced components.

The Shin Chae-ho was launched hours after North Korea tested a new missile that state media outlet KCNA claims can fly at hypersonic speeds. South Korea’s joint chiefs dismissed the significance of the test, saying in a press statement that the missile-- reportedly dubbed the “Hwasong-8”-- remains in an early development stage and can be intercepted by current U.S. and ROK defense systems.