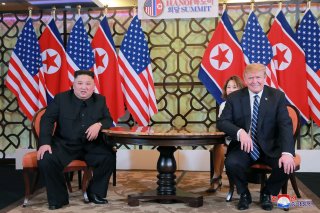 Whatever it was, it appears to be over.

In late 2017, as President Donald Trump has himself admitted, the United States and North Korea came very close to fighting a war. But then, against all odds, Donald Trump and Kim Jong-un became pen pals. Just months later, the two leaders were exchanging flowery prose in anticipation of their historic face to face meeting in Singapore. Even some skeptics were beginning to question whether or not the complete 180-degree pivot from the brink of war to a summit signaled that Trump could finally be the president who would make a breakthrough with North Korea.

Arguments against legitimizing a cruel despot aside, the Singapore summit went relatively well—The United States managed not to give anything away without demonstrable steps by Pyongyang and the two sides appeared to build goodwill that would set the groundwork for future negotiations. And so, the letters continued, leading many to call the correspondence evidence of a budding “bromance.” Trump had clearly bought into the idea, going so far as to joke that he and Kim—a man responsible for the death of his brother, uncle, at least one American, and an inestimable number of Koreans—had fallen in love.

Applying the term bromance to the relationship between Trump and Kim gives credence to the absurd notion that the leaders were really friends and that personality-driven diplomacy is a possible way forward to peace on the Korean Peninsula. In truth, their transactional relationship is a far cry from friendship—they simply both thought that appealing to their interlocutor’s ego was the most viable way to achieve their objectives. Kim Jong-un’s letters (or more likely the letters of a skilled North Korean psychological profiler) are cloyingly sentimental but invariably fall short of good faith commitments to addressing Washington’s concerns.

Kim Jong-un realized his strategy was a failure at the Hanoi summit, when to Trump’s credit, Kim’s chagrin, and the relief of many watching from the United States, the President ended meetings early once he realized that Pyongyang was not ready to make a meaningful deal. Kim maintained his epistolary strategy until several months later, when the two leaders met at the DMZ and again came away with nothing concrete. As Trump’s March 2020 letter to Kim offering coronavirus aid failed to even garner a reply, it appears the faux bromance is finally over.

Becoming friendly with Kim Jong Un by opting for summits at the expense of sucking the air out of the U.S. negotiating team’s efforts is not a diplomatic achievement. Now that summits and letters appear to be off the table, President Trump is left with little choice but to focus on restoring the capacity of working-level negotiations if he gets reelected in November. Supplementing those efforts with steps to restore allied involvement in the conversation is essential, because unlike President Trump’s relationship with Kim Jong-un, Washington’s relationships with Seoul and Tokyo can act as a true force multiplier for U.S. strategy in the Indo-Pacific.